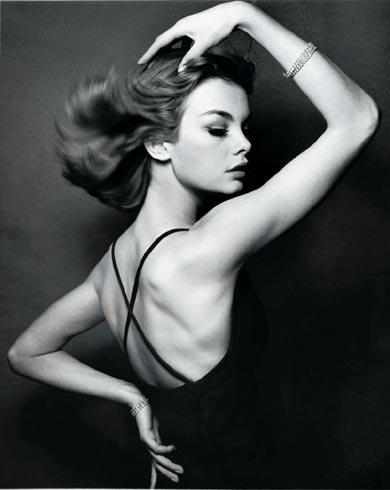 Above Jean Shrimpton, a.k.a. the Shrimp, as photographed by Bailey in British Vogue.

A selling exhibition, Pure Sixties, Pure Bailey, of David Bailey’s iconic images of the 1960s will be hosted by Bonhams at 101 New Bond Street from March 7 to April 7, the company announced yesterday.
In celebrating the 50th anniversary of the start of the ’60s, Bonhams approached Bailey to put together an exhibition.
Bailey, whose work typiﬁes the new energy of the era, began working at British Vogue in July 1960 and was famously quoted as saying, ‘When Vogue offered to pay me to photograph beautiful women all day I thought I was on a dream-boat.’ Amongst the many faces he captured were Jean Shrimpton, Penelope Tree, Catherine Deneuve, Brigitte Bardot and Raquel Welch.
Bailey also photographed other headline-makers, including the Rolling Stones, Andy Warhol, Rudolf Nureyev, Cecil Beaton, Michael Caine, the Beatles, David Hockney, Roger Vadim, Kenneth Tynan, the Who and the Kray brothers. Many of the images he shot were very direct, closely cropped portraits.
He continues to be active and has two shows planned, along with an exhibition of his sculpture.