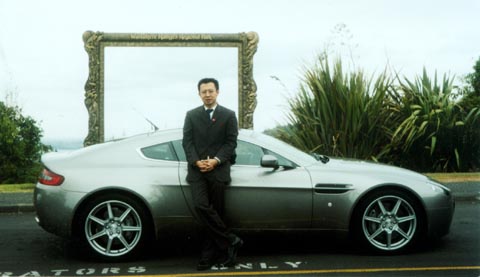 Above The author with the Aston Martin V8 Vantage in 2006.

[Cross-posted] Autocar is currently talking about what was the car of the decade. I remember in 1989, the magazine ran a series on the most beautiful cars of each decade, and named the most signiﬁcant. That decade, the Ford Sierra was the most signiﬁcant, for mainstreaming the aero look, an assessment I agree with.
One of its writers has named the Audi R8 his choice, and the magazine is doing a poll, asking readers to vote on theirs. The magazine has provided a list, which includes the Hyundai i10 (important for the Indian motor industry’s global exports) and the Toyota Prius NHW20 (but what does it really pioneer than the original NHW10 did not?).
What surprises me is that the Aston Martin V8 Vantage is not on its list. You can write it in, but how come this very British of automobiles is missing?
I know the 911 beats it dynamically on every count. I know it’s not as powerful as the bigger DB9. On the other hand, it looks the business, and the only area where it stirs the soul more than its looks is its sound.
It’s the opposite of the attractive woman who sounds common the minute she opens her mouth. The V8, more than the DB9, and more than the 911, seduces you a second time when you open her up.
What it does represent is the survival of a brand, and how to do a downward brand extension without losing too much exclusivity.
While the V8 Vantage means that more footballers are able to get their hands on one without getting into the Premier League, at least it has assured Aston Martin’s survival for the decade—and a good part of the coming one.
For most of my lifetime, Aston Martin Lagonda has really been a single-range marque with the occasional four-door model that broke down.
Now it ﬁelds a wider product range of the V8, DB9, DBS and Rapide, and we haven’t even looked at the limited-edition models.
It was a downmarket extension that was not botched. For a lesson on how not to do it, one need look no further than the Jaguar X-type, which was Detroit’s way of taking on BMW’s 3er.
One of my friend and colleague Stanley Moss’s Medinge papers dealt with this very topic, indicating that the Europeans did downmarket forays better.
How ironical, in this case, that both these examples happened while Ford ran Aston and Jaguar. However, one might say that Aston was left more to its own devices than Jaguar was.
In addition, the V8 Vantage made Aston Martin a brand that kids could point at and dream about. When I was a child, the car with the same name, which was based on the original DBS, was a brute, but it was never the star of my bedroom wall. It was not cool in the way the Porsche 930 was cool. Or the Lamborghini Countach.
Sure, the V8 did not mobilize the masses nor did it present a new technology.
But for Autocar readers, I suggest they enter this model in for its signiﬁcance to the Aston marque, to British ingenuity, and for a reassuring dose of patriotism.