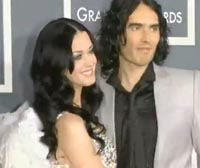 Moncrieff’s honour comes on the eve of WOW’s 25th anniversary. She started the event to promote wearable arts in Nelson, before it later moved to Wellington. It is a world-class event that attracts international media each year. The Hong Kong Jockey Club plays host to WOW later in January.
In other news, comedian Russell Brand and singer Katy Perry will divorce, after only one year of marriage.
Brand ﬁled for divorce on Friday at the Los Angeles Superior Court, citing irreconcilable differences.
They had already spent Christmas apart, not wearing their wedding rings.