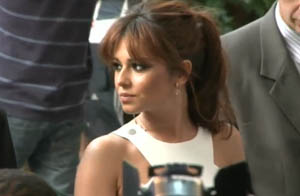 Back in London, the stars have gathered for the première of What to Expect When You’re Expecting, the new Cameron Diaz–Chace Crawford film in which Cheryl Cole has a two-line cameo.
Being Britain, of course, the big cheers were reserved for the Geordie songstress, who wore a white Victoria Beckham dress complemented with Garrard jewellery.
Diaz was also in white, wearing a jumpsuit.
The Hollywood stars were in luvvie syndrome praising Cole on her home turf. Diaz commented on the red carpet, ‘She really did us a huge favour by coming in and letting us sequester her for a couple of days, and take her out to an old abandoned warehouse in Atlanta and make her act for us.’
The scenes were filmed shortly after Cole was a judge for her short-lived stint on the US version of The X Factor.
What to Expect When You’re Expecting also stars Matthew Morrison (Glee), Anna Kendrick (Twilight), and Rodrigo Santoro (Lost).
Kendrick says of Crawford, ‘He’s terrifyingly good looking in person. You think that it’s all kind of camera magic, and wow, you really look like that. Those eyes are for real.’
Other red carpet comments in the video below are from Santoro, who says it would be ‘courageous’ and ‘challenging’ to bring back Lost, while Rochelle Wiseman, fiancée to JLS’s Marvin Humes, talks about her hens’ night and wedding plans.
Finally, newly announced Chanel No. 5 spokesman Brad Pitt is at the Cannes Film Festival for the première of Killing Them Softly, but is asked about his wedding plans to Angelina Jolie. Pitt says that the date is definitely not fixed, despite rumours to the contrary. He adds, ‘I’m still hoping we figure out marriage equality in the States before then.’