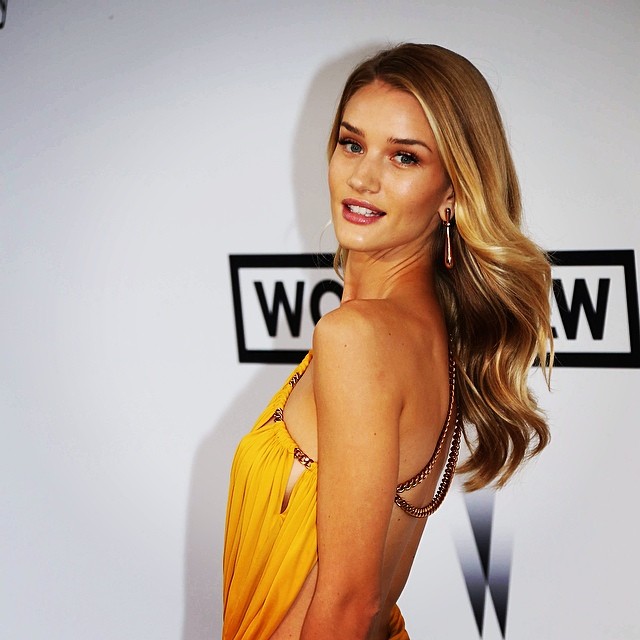 Above Rosie Huntington-Whiteley with her de Grisogono earrings at the AmFAR Gala last night.

De Grisogono has been a bit more exclusive this year with its annual Cannes Film Festival party at the Hôtel du Cap-Eden-Roc, though it has given a brief insight into its jewellery with the first video below (with English and French versions). Each year, it creates special-edition items for the Festival, releasing a version of the Instrumento.N.Uno watch in 2014 to tie in with The Expendables 3 film (its actors wear the watch). Cara Delevingne, Antonio Banderas, Paris Hilton and Riley Keough comment.
Beauty also gets a look-in. We’ve featured some of the behind-the-scenes stories from the Hôtel Martinez where L’Oréal Paris has its base, but Dessange and Dior also make an effort to relocate to the Croisette each year to service their clients. Their private showrooms allow celebrities to get coiffed and made up: Dessange, which has partnered with the Festival de Cannes for over three decades, shows its four stand-out styles for the season: faux wavy bob, static extensions, twisted ponytail or sleek minimalism. Dior, meanwhile, cossets its clients in a pop-up salon.
Dessange’s hairstylist Stéphane Bodin, notes, ‘A team of 20 hairstylists are at the actresses’ disposal for the duration of the festival, from very early in the morning, at around 7.30 or 8 o’clock, especially when they have photo calls and press conferences for the competing films. As a general rule, when you are put in charge of an actress, it is for the entire day because there is the red carpet in the evening and also lots of meetings that build up, schedules change every hour or thirty minutes according to all the whims of everybody here.
‘In Cannes, anything goes, even quite original hair styles; if you can’t do it here, then you can’t do anywhere but I find that the main trend is a return to the beautiful, simple and natural.’
Violette, Dior’s international make-up designer, says, ‘The Dior suite is like a hidden beauty paradise because you feel very much sheltered from the outside world. Cannes is full of people, non-stop flashes and endless pressure and so you arrive in this cosy nest where you are pampered, beautified and comforted so that you can get your nails done as well as your make-up. Sometimes we also have hairstylists who come to perfect the stars’ hair so a woman can have a full beauty service.
The women that we look after want to be glamorous. Cannes is the place where femininity is celebrated and every pleasure is permitted so if you want to paint your lips in an extremely strong, and intense shade of red then you can. That’s what the festival is all about.’
Fashion labels, too, make an effort to get exposure, knowing how the wealthy and the celebrities descend upon Cannes for 10 days. Elie Saab and Smalto are among the two who set up there.
Emilie Legendre of Elie Saab says, ‘The Cannes Film Festival has to be prepared well in advance, meaning that dress fittings often begin two or three months beforehand so that the final selections are announced … It is our job to work on setting up the showroom and the suite as we entirely redecorate, and then, of course, we have fittings on-site when we finalize everything, which we generally call the final fitting before stepping onto the red carpet.
‘When we come down, we bring someone from the studio in Paris as at the fitting every dress has to be readjusted.
‘The day after the event, there are lots of requests from the clients who call up asking for news about their dresses, and essentially it is the visibility that comes with this social network immediacy and the live broadcasting of information that ensures that minutes after setting foot on the red carpet, the entire world already knows how many actresses wore Elie Saab.’
Youn Chong Bak of Smalto says, ‘We devised a range of three different tuxedos that are available to the actors. We have done a bow-tie box because as everybody knows, you cannot walk on the red carpet without wearing a bow tie and, this year, we accentuated this gold side in recognition of the Palme d’Or. We also created a case with a golden eyelet or with golden detail.
We really tried to highlight this tailored-made aspect, particularly the silhouette created by Monsieur Smalto with small, elongated shoulders, well fitted but a structure that emphasizes virility and therefore the gentleman himself.’
Our final video with Christophe Robin, sees the “colourist to the stars” give an exclusive interview, with the help of French legend Catherine Deneuve. (Deneuve’s endorsement of Robin can be seen on his website.)