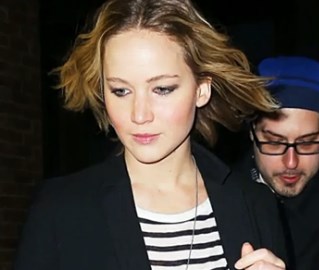 Academy Award-winning actress Jennifer Lawrence, the most Googled celebrity of the year and one of our news-makers of 2013, was looking stylish as she left the Greenwich Hotel in New York wearing a Breton striped sweatshirt, blazer, skinny leather pants and Givenchy sandals. Lawrence has denied that there is any involvement between her and producer Gabe Polsky, with the actress clarifying that he is the boyfriend of her best friend. The gossip media enjoy speculating—when there’s nothing happening.
Similarly, a quick adjustment by Lady Gaga after a wardrobe malfunction revealed her Spanx merited headlines although what was more impressive, to us, was her feathery white dress, then her plunging white gown and netted overlay that she wore for her guest appearance on The Tonight Show Starring Jimmy Fallon later that day. Gaga performed Cole Porter’s ‘Ev’ry Time We Say Goodbye’ while on the show, featured below.