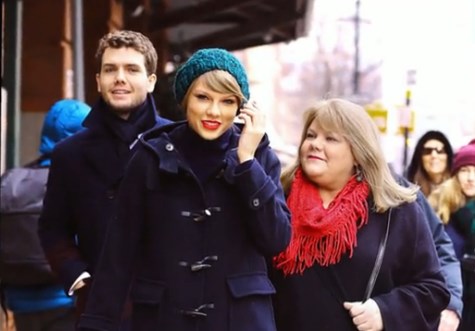 Taylor Swift headed out on Monday in Tribeca, New York, with her mother, father and younger brother, wearing a fashionable ensemble of a Ralph Lauren navy roll-neck sweater and coat, over a tartan skirt and woollen tights, topped with a green woollen hat.
The singer, who recently turned 25, and who remains one of the most talked-about musicians in the occident, looked fashionable in navy and magenta. She wore a bright red lipstick and thick eyeliner.
The family enjoyed brunch at Locanda Verde on Greenwich Street.
Green, rather than navy, was the choice of Lauren Silverman, wearing a Melissa Odabash bikini with a straw hat and netted top while on holiday in Barbados with Simon Cowell and their son, Eric.
Our last video is a summary of One Direction’s best moments of 2014. Still riding high, the former X Factor stars have scooped many awards, and as a group, earned $75 million in 2014.