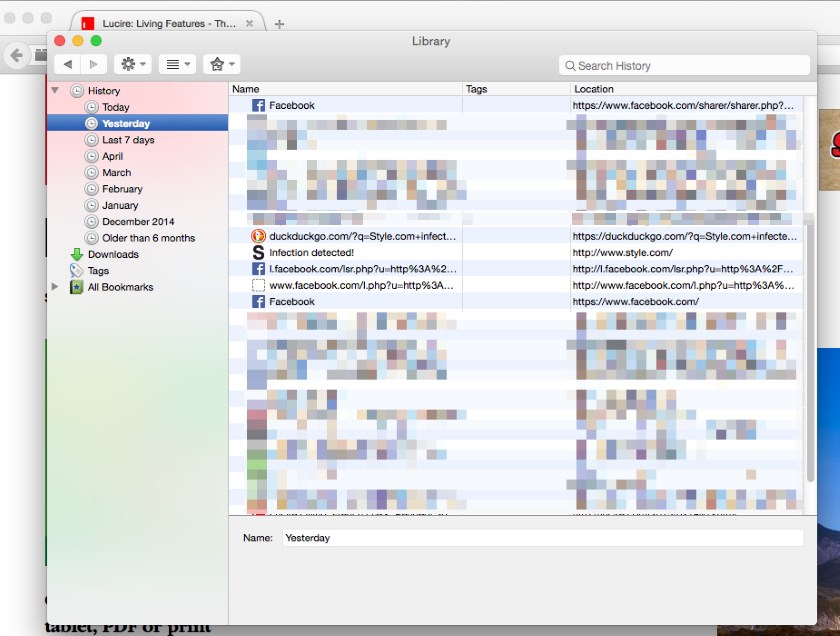 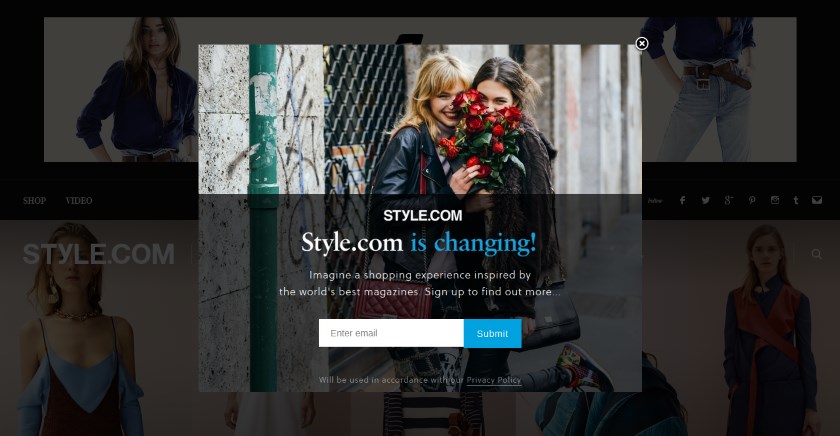 Top Earlier today, attempting to get into Style.com meant a virus warning—the only trace of this curiosity is in the web history. Above Style.com is back, with a note that it will be transforming into an e-tail site.

If there’s one constant in fashion, it’s change. The other one, which we notice thanks to a number of our team being well schooled on fashion history, is that trends always return, albeit in modified form. Both have come into play with Style.com, which announced earlier this week that it would become an ecommerce site.
When Lucire started, we linked to style.com, but it wasn’t in our fashion magazines’ directory. It was, instead, in our shopping guide.
In 2000, that all changed, and it began appearing under our fashion magazine links, where it was until today. An attempt to log in to the home page was met by a virus warning, preventing us from going further. We figured that this was part of the transformation of the website as it readied itself for the next era, discouraging people from peering. However, having had these warnings splashed across our own pages two years ago courtesy of Google’s faulty bot, when our site was in fact clean, there was a part of us taking it with a grain of salt. In either case, given the impending change, it was probably the right time to remove the link.
This evening, Style.com is back and virus-free, with an overlay graphic announcing that the website will be changing. Plenty of our media colleagues have analysed the closure over the past week: the Murdoch Press has gossiped about how the layoffs were announced, WWD suggests editor-in-chief Dirk Standen didn’t know it was coming, based on rumours, while Fashionista puts it all into context by analysing just where ecommerce is within the fashion sector, and that content should be the answer over clothing sales.
What is interesting is no one that we’ve spotted has mentioned how the style.com domain name (we’ve carefully noted it in lowercase there) has effectively come full circle. Perhaps we really are in the age of Wikipedia-based research, as this fact is not mentioned there at all.
When Lucire launched in 1997, style.com was the website for Express Style, later more prominently, and simply, branded Express, a US fashion retailer. It’s not hard to imagine that had Express remained at the URL, it would have become an e-tailer; it has, after all, made the move into ecommerce at its present home, express.com. Like a fashion trend that comes back two decades later, style.com has gone back to its roots: by the autumn it’ll be e-tailing.
The omission from the above paragraph is the sale of the style.com domain name by Express to Condé Nast in the late 1990s. We never completely understood the need to start a new brand to be the US home of Vogue and W; for many  years, typing vogue.com into the browser in the US would take one automatically to Style.com. Then, somewhere along the line, Condé Nast decided that vogue.com should be the online home of Vogue after all.
But having made the decision to forge ahead with Style.com, Condé Nast did it with a lot of resources, and took its site to number one among print fashion magazine web presences in a remarkably short space of time. It devoted plenty of resources to it, and it’s thanks to Style.com that certain things that were once frowned upon—e.g. showing off catwalk collections after the show—became acceptable. Designers used to enjoy the fact that we and Elle US delayed online coverage, the belief being that the delay ensured that pirates could not copy their designs and beat them to the high street.
To get itself known, Condé Nast bought advertising at fashion websites that were better known, including this one (yes, in 2000 that really was the case), at a time when online advertising cost considerably more than it does today.
The muscle from the best known name in fashion publishing changed the way the media interacted with readers. Designers figured that if they wanted coverage, they would have to accept that their work would be shown nearly instantly. We became used to that idea, so much so that we now have to show the catwalk videos live in the 2010s.
In some ways, the change makes sense: we’re talking about an Alexa rank in the 4,000s, which translates to plenty of traffic. The name is known, and most shoppers will make some association with Vogue. The official word is that Franck Zayan, formerly head of ecommerce for Galeries Lafayette, will helm the revised website, and he’s reporting that brands are coming on board rapidly.
One shouldn’t mourn the loss of Style.com as a fashion news portal, since the content we’re all used to is bound to appear at Vogue. And in all the years we had it in our magazines’ directory, it was listed under our Vogue entry anyway. We await the new site to see what Condé Nast will do with it, and it may yet return to the spot where it once was in the 20th century, in the shopping guide.—Jack Yan, Publisher

One thought on “It’s full circle for style.com: back to its origins in fashion retail”