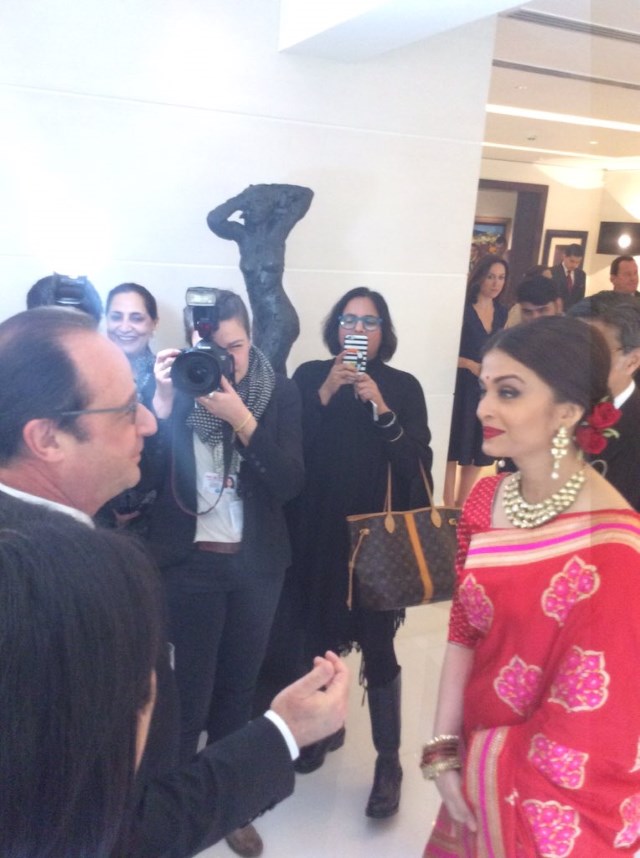 Aishwarya Rai Bachchan, Shah Rukh Khan and director Aditya Chopra were the guests of honour of French president François Hollande, who had been in India for an official three-day visit. Hollande marked the country’s 67th Republic Day on Tuesday with a luncheon in New Delhi, and the Élysée shared the above photograph of the actress and former Miss World wearing a red sari with the president.
Rai’s invitation had come from the French ambassador to India François Richier. She attended, representing Indian cinema.
The actress is currently filming Omung Kumar’s Sarbjit, to be released May 19, playing prisoner Sarabjit Singh’s sister Dalbir Kaur. Randeep Hooda is in the title role.
She is already familiar to French audiences through her acting as well as being a L’Oréal spokeswoman, which sees her attending the Festival de Cannes regularly.
Hollande had arrived Sunday in Chandigarh to commence his visit. He departed for France, after attending Republic Day functions, on Tuesday at 5.30 p.m. IST.