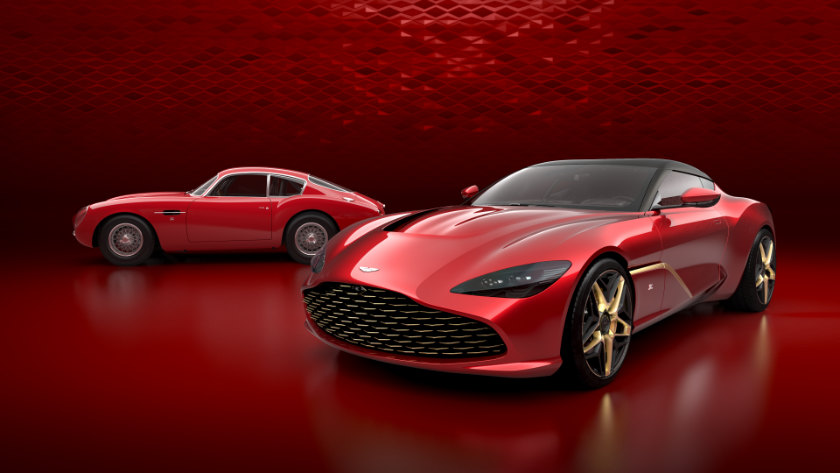 Previewed last September, Aston Martin has now released computer generated images of how its DBS GT Zagato might look, alongside the DB4 GT Zagato Continuation.
The company will create 19 pairs of the cars, to be sold together as the DBZ Centenary Collection at a price of £6 million plus tax.
The centenary refers to that of Zagato, the famed Italian coachbuilder that worked on the original DB4 GT Zagato in 1960.
The new car is based on the Aston Martin DBS Superleggera and shows what the company calls ‘the next evolution in Aston Martin Zagato design language.’
The grille is ‘dynamic’: there are 108 carbonfibre pieces that are flush with the exterior when stationary, but when the car is on the move, they open up to allow air into the engine.
A single piece of carbonfibre serves as the roof and covers where the rear window would be. A camera-operated rear-view mirror is offered for rear visibility.
Aston Martin’s chief creative officer, Marek Reichman, said, ‘This is a car that is not only focused around beauty, but drama, too. Our dynamic grille gives us an opportunity to provide the car with two very different identities. When parked, DBS GT Zagato will almost look like it’s resting, but with the rear of the car still appearing muscular and primed for action. Only on start-up will the car truly become alert and ready to perform, delivering both an aural and visual treat for onlookers.’
Production of the DBS GT Zagato is slated for next year. The DB4 GT Zagato Continuation models will be created this year.