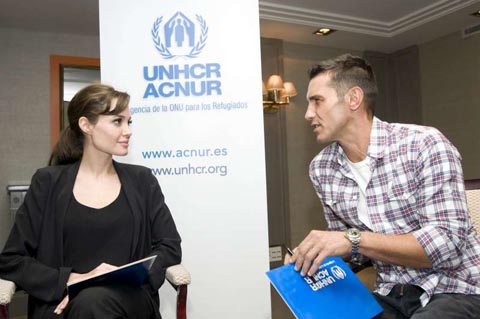 Angelina Jolie continued to highlight the work of the Ofﬁce of the United Nations High Commissioner for Refugees—UNHCR—as a Goodwill Ambassador for the international refugee agency on Thursday.
She met with fellow ambassador Jesús Vázquez, the Spanish TV presenter, to celebrate the organization’s 60th anniversary in Madrid.
The UNHCR was only meant to run for three years when founded in 1950, to work with displaced European refugees in the wake of World War II.
However, there was a continued need for its existence with the continued conﬂicts humankind has waged since. The organization has won two Nobel Peace Prizes.
‘In the week of UNHCR’s anniversary, I would like to highlight the strength and courage of the world’s refugees and forcibly displaced people who are, for all of us, an example of generosity and dignity,’ says Jolie. ‘My thoughts go also to the dedicated UNHCR staff, who for many years have risked their lives to protect the lives of refugees.’
While in Spain, the actress learned more about the country’s asylum system, mixed migration ﬂows into the country, resettlement and other issues.
Jolie was in Madrid to promote her new ﬁlm, The Tourist, in which she stars opposite Johnny Depp. The ﬁlm is a remake of 2005’s Anthony Zimmer, which starred Sophie Marceau and Yvan Attal.
She shared some of her experiences as a Goodwill Ambassador with Vázquez, who has worked with UNHCR since 2006.
Vázquez most recently promoted UNHCR at a charity art auction on Wednesday in Madrid.
The UNHCR was founded on December 14, 1950.