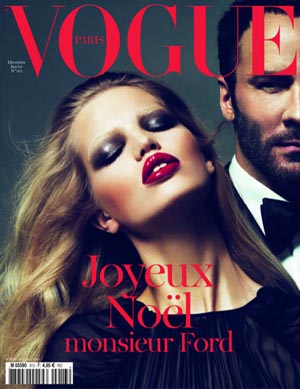 Above Vogue Paris’s December 2010 issue, with Tom Ford as guest editor. Roitfeld and Ford had worked together in the 1990s and were close collaborators.

Carine Roitfeld, editor-in-chief of Vogue Paris, yesterday announced that she will stand down from the role in January. The April 2011 issue will be her last.
Roitfeld, 56, would have celebrated her 10th anniversary as editor in 2011.
Jonathan Newhouse, chairman of Condé Nast, says Roitfeld ‘plans to step down in order to take her life and work in a new direction,’ while British Vogue reports that she will focus on ‘personal projects.’
Xavier Romatet, chairman of Condé Nast France, says, ‘I deeply regret Carine’s decision, though I understand it. A page turns, as we begin a new stage for this brand, one that is strong, powerful and sure of its values.’
Newhouse says, ‘It is impossible to overstate Carine’s powerful contribution to Vogue and to the ﬁelds of fashion and magazine publishing. Under her direction, Vogue Paris received record levels of circulation, advertising and editorial success.’
Under Roitfeld’s watch, Vogue Paris‘s circulation went from 100,000 to 140,000.
Roitfeld began in the industry as a model, before working for Elle as a writer and stylist. In the 1990s, she worked with Tom Ford at Gucci, Yves Saint Laurent, and photographer Mario Testino.
It had been speculated that she could take over from Anna Wintour at Vogue, and the two women’s contrasting styles are sometimes compared by fashion-watchers. It was felt by some that Roitfeld was the more approachable.
Condé Nast has not named a successor, but observers believe Emmanuelle Alt, the magazine’s fashion director, is the most likely choice.

2 thoughts on “Carine Roitfeld resigns as editor of Vogue Paris”