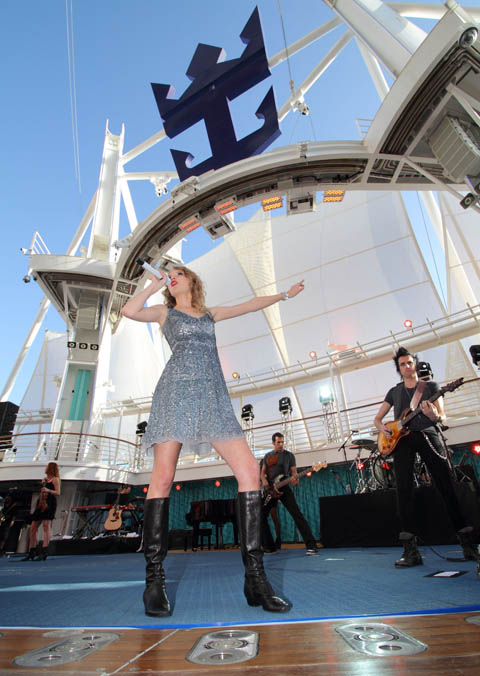 Above Taylor Swift performing on Allure of the Seas, last year. Swift, the biggest earner in music in 2011 in the US, got to the top slot through sales, royalties and touring. Below left Swift’s highly successful Speak Now album. Billboard has put 22-year-old country star Taylor Swift in top spot as the music industry’s biggest earner in 2011.
Swift’s earnings came from music sales, royalties and touring, said the magazine.
Restricting its ﬁndings strictly to US income sources, Billboard reported that the country star earned US$35·7 million, ahead of U2 with US$32·1 million, Kenny Chesney with US$29·8 million, and Lady Gaga with US$25·4 million.
Wyomissing, Pennsylvania-born Swift ﬁrst came to prominence with a self-titled album, released while she was a teenager. Her 2008 album, Fearless, débuted in the number-one slot on the Billboard 200 chart.
She sold over 1·8 million albums in 2011.
Swift also has a fragrance, developed with Elizabeth Arden.
Rounding off the top 10 were Lil Wayne (US$23·2 million), Sade (US$16·4 million), Bon Jovi (US$15·8 million), Céline Dion (US$14·3 million), Jason Adlean (US$13·4 million) and Adele (US$13·1 million), whose earnings were impacted by her throat surgery and the cancellation of a North American tour.
Sir Elton John was just outside the top 10, in 13th place while Sir Paul McCartney got into 25th. The Beatles, meanwhile, got to 24th, thanks to its back catalogue.
Billboard’s ﬁgures are net and exclude sponsorships, merchandise sales or synchronization deals.