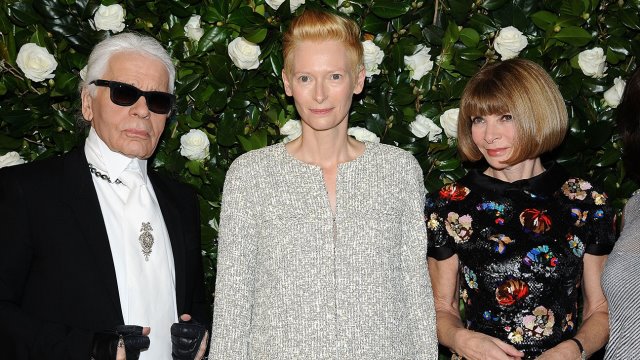 Tilda Swinton celebrated her 53rd birthday at the Museum of Modern Art in New York, during its sixth annual Film Benefit cocktail hour. She is the first actress to be honoured by the benefit.
Arrivals in Lucire’s video below New Zealand’s fast-rising songstress Lorde, Jessica Biel, Vogue editor-in-chief Anna Wintour, Karl Lagerfeld, Karlie Kloss, Alexa Chung, Sofia Coppola, 12 Years a Slave’s Lupita Nyong’o, Brit Marling, and Cory Kennedy. Other celebrity guests at the event include David Bowie, Ralph Fiennes, outgoing New York mayor Michael Bloomberg, Zac Posen and Bong Joon-ho.
Swinton joked, ‘My last birthday party was when I was nine and we had a trampoline, but who knew 53 would top even that?’
Swinton had performed at the museum earlier this year as part of an installation, The Maybe, where she had to lie in a glass box for the day.
Earlier honorees include Pedro Almodóvar, Kathryn Bigelow, Tim Burton, Baz Luhrmann, and Quentin Tarantino.