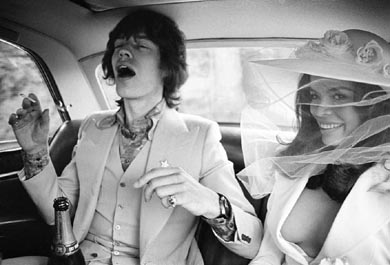 One image that wasn’t mentioned in Monica Waldron’s report from the May–June exhibition of Patrick Lichfield’s work was the above shot of Mick and Bianca Jagger on their wedding day in St Tropez. This was taken right after the Jaggers’ wedding on May 12, 1971, and was indeed part of the exhibition, and is yet another example of Lichfield’s ability to capture the moment. It’s one of my favourites.

As Monica reported, many of his portraits are done with great sensitivity, not necessarily of the most extroverted subjects. The above is spontaneous, as many of Lichfield’s images are, and can only be from the early 1970s, not because of photographic style, but because of Jagger’s clothing and, for car spotters like me, the shape of the car’s C-pillar. It must be one of those rare times that it is not the woman’s clothing that dates an image most: weddings, in the 21st century, are no longer as demanding of tradition, and Bianca’s garb, while probably sexier than the norm, could be considered an example of one bride’s uniqueness. In 1971 it would be considered far more way-out.

Unlike this image, and perhaps in contrast with Monica’s views, what was remarkable to me was how timeless many of Lichfield’s shots were. One might say that emotion is timeless, hence the perceived energy emanating from the shots never dates, but the glowing image of Olivia Newton-John, free of heavy make-up, has little to date it back to 1973 in the eyes of the layman like me. Ditto Lichfield’s nude of actress Jane Seymour, which we did not feature.

And for celebrity-watchers, that is indeed Joanna Lumley on our web-edition cover, photographed before Sapphire & Steel, The New Avengers, even before her appearance in On Her Majesty’s Secret Service. The 1965 photograph has, admittedly, dated—but, principally, Miss Lumley’s swimwear is the culprit.

2 thoughts on “The timeless aspects of Patrick Lichﬁeld’s work”