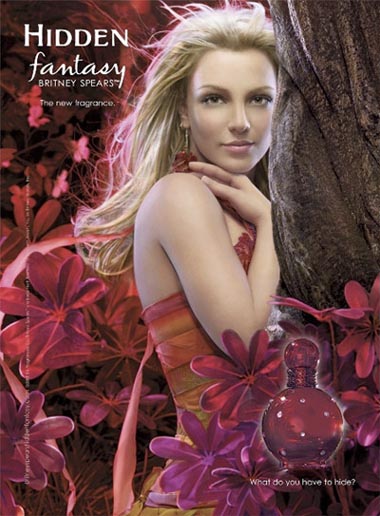 Above: Britney Spears in a Hidden Fantasy print advertisement for Elizabeth Arden.

Who would have guessed, when we published our piece, ‘Rescuing the Britney Spears Image’ in March last year, that the singer’s negative image could be overturned so substantially by January 2009?
Since March 2008, Spears has made a proper comeback—despite continuing bad press and exposés in Condé Nast Portfolio and The Atlantic over Britney-tailing paparazzi. In November, Spears won two MTV Europe Music Awards and released her ﬁfth number-one album.
It all helps her Elizabeth Arden contract, which has seen a new fragrance, Hidden Fantasy, which launched in the US late last year and will hit New Zealand shelves January 26. There is a brief news item on our beauty index page, and it’s hard to believe that there’s precious little affecting the fragrance’s marketing negatively this time around.
Such are the whims of the Zeitgeist, on the one hand; and the public’s tiring of continual bad news about the star. But as we predicted in March 2008, too, Spears’ comeback this time was founded more on authenticity: her December 2 TV documentary featured clips with the star admitting her personal mistakes without the tabloids’ editorializing. She used her access to the media, and their fascination with her, to her own advantage—for a change.
It all worked rather well—and shows that, given the right forum, people can accept someone who tries to speak candidly, even one who had been such a target of negative criticism only 12 months ago.

One thought on “Britney Spears turns her image around, as predicted”