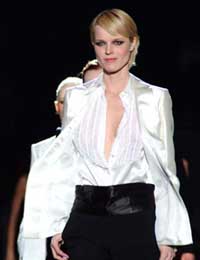 After 1,000 posts at Lucire’s ‘Insider’ section—a relative latecomer in terms of fashion magazine blogs—we thought it might be fun to go into statistician mode and reveal which were the top articles and ﬁgures over the last two and a half years.
There were reasons we avoided blogging. First, Lucire had an active forum until the mid-2000s, and we were interacting with readers there. Secondly, snobbery. For all the times we said we wanted to deliver a meritorious, non-élitist approach to fashion, we didn’t feel it was our place to blog. (Bear in mind, too, that the well designed blogs that we see today were not common currency in the early 2000s, and they were not as easy to design when it came to positioning photographs. Most still aren’t, on that latter point.) Thirdly, we were preoccupied with launching our print editions.
Many Lucire writers and the publisher maintained their own blogs, but it was not till a very late 2007 before ‘Insider’ (a column name taken from print) came into existence.
And looking through those 1,000 posts, we see some surprising trends.

This is very surprising for us, given that there are far more articles on, say, Claudia Schiffer and Elle Macpherson than Karen Elson or Gavin and Stacey’s Joanna Page. But in terms of names that bring you here, the above are the most regular.
Stephanie Chaves-Jacobsen has a larger fan base than Hollywood might realize. And we didn’t expect Jennifer Garner to outrank Catherine Zeta-Jones or our favourite Dragnet cop, Eva Longoria.
Jaclyn Smith and Jodie Foster show that crossing 40 is nothing to be concerned about.
Before real statisticians come by, we realize that these results are not indicative of the Zeitgeist, and in no small part reﬂect what we have put here on ‘Insider’. There are other celebs who are outranking these ones, but they are directed to other parts of the Lucire site. Still, out of 1,000 posts and many more viewers, it’s an interesting sample.

This is less surprising, for the wrong reasons. It’s not hard to imagine why the Ryanair article scored so well: there are people who aren’t interested in fashion or modelling stopping by. For more innocent reasons, our Iranian Cyber Army story ranked well because we were the first media to report on it, even if it was just telling readers why they could not access our Twitter account. We seem to get a lot of beauty-pageant visitors, which ensures the last three their place, though a more regular fashion audience help keep stories on Brooklyn Decker and Eva Longoria up high.
Interesting, then, that neither Brooklyn nor Eva are the most searched-for celebs (they are 16th and 15th respectively).