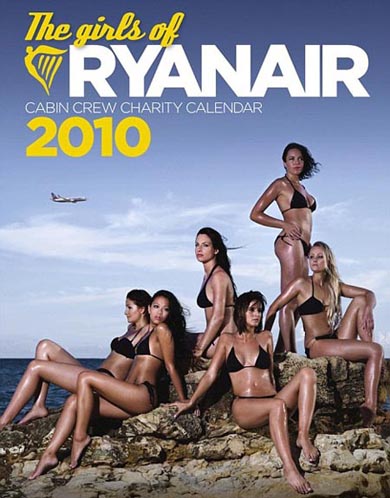 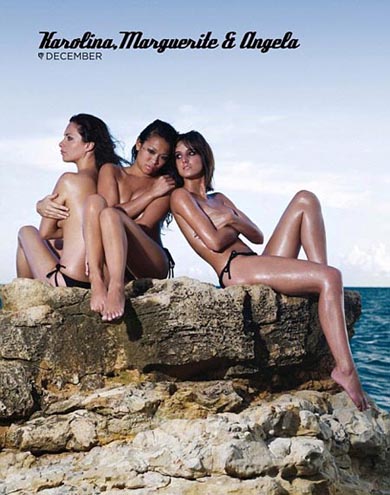 We knew it was that time of year again: the number of searches that resulted in hits at Lucire about the Ryanair calendar were on the rise again.
Last year, this magazine covered the story brieﬂy, trying to stay neutral by reporting the facts. We detailed how there were concerns about the objectiﬁcation of the Ryanair female staff who appeared in the calendar, while noting that proceeds were donated to charity.
We didn’t cover the news of the new calendar this year because it seemed to be yet another repeat of 2008. And of 2007. One side condemning it, the other side saying, ‘But it’s for a good cause.’
Shot in Alicante, Spain, this time around, with proceeds this time going to KIDS (for disabled children and their families), the 2010 The Girls of Ryanair calendar (at €10) goes a bit further than its predecessors. There is more nudity, though concealed, while the Ryanair publicity machine has gone on high gear by making a “making-of” video available on YouTube (below).
However, the airline is unashamed this time around of pushing the sex appeal of the calendar, with the last frame in the video reading, ‘Fly Ryanair for the lowest fares and the most gorgeous girls.’
An excuse for male passengers to sexually harass Ryanair staff, perhaps?
When the airline is being that obvious with its motives, it lends weight to its critics, with one MEP last year, Mary Honeyball, calling the 2009 edition ‘derisory’.
As a man, of course I admit that gazing at beautiful women brings me some pleasure, and that in that respect this calendar’s imagery is no different to my female friends who enjoyed the New Zealand Fire Service’s ﬁremen calendars over the years. 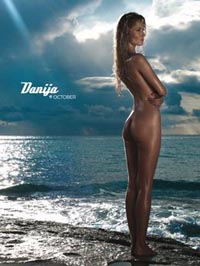 The line, I feel, rests between stripping off for a good cause and actively promoting sexism. Swimsuits are one thing, but have we strayed a tad too far into the lads’ mags category when Danija appears on the October page in her birthday suit (left), and several of her colleagues are topless? Does this really help Ryanair’s brand?
It would be easy to use the Sports Illustrated Swimsuit Edition’s example, where that magazine pushed its envelope from year to year—but then, we have models there, not airline personnel who have to return to work.
And our ﬁremen had some gear on: no bloke was left holding his bits in any shot.
It is the individual woman’s choice at Ryanair—and 800 applied voluntarily, which is about a ﬁfth of its cabin crew workforce—and I am sure that they were aware of the consequences. Calendar or not, some are probably subjected to inappropriate advances anyway.
However, I’m not as convinced this year of the charity angle as I was in previous years, now that less of Ryanair’s staff members’ modesty has been preserved. The calendar would have sold in the same numbers regardless.
Maybe now that my friends’ daughters are beginning to model in their teens I am getting more paternal, which is rather better than becoming a dirty old man.
Nevertheless, one only hopes that KIDS beneﬁts hugely, and that we chaps are civilized enough to separate a charity effort from real life. Sometimes I wonder.

7 thoughts on “Has Ryanair pushed its 2010 calendar too far?”