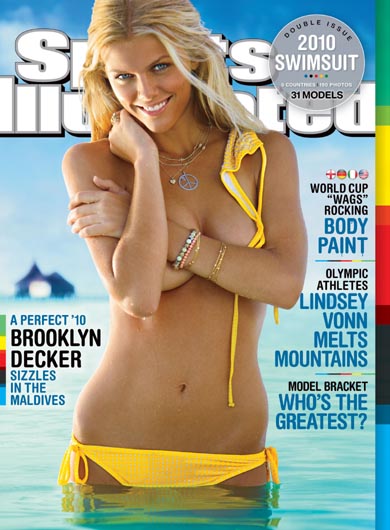 Brooklyn Decker, who appeared in a Lucire swimwear shoot by Jon Moe some years ago, has scored herself an even higher-proﬁle accolade: the cover of the 2010 Sports Illustrated Swimsuit Issue.
The Ohio-born model appears on the cover in a shoot in the Maldives, photographed by Walter Iooss Jr.
The issue also features models Bar Refaeli, Hilary Rhoda, Julie Henderson, Rookies Christine Teigen and Dominique Piek, US Olympians Lindsey Vonn, Hannah Teter and Lacy Schnoor, US Dancing with the Stars’ Cheryl Burke and Edyta Sliwinska, women’s tennis sensation Ana Ivanovic, and World Cup WAGs in body paint.
As cover model, Decker joins a legacy of supermodels who have adorned the cover including Kathy Ireland, Cheryl Tiegs, Hiedi Klum, Elle Macpherson, Tyra Banks and Petra Nemcova. Many of these covers were shot by Iooss who, with the addition of this year, has eleven SI Swimsuit covers to his name.
The online complement, SI.com/Swimsuit, features more than 1,400 photos and 100 videos of the models taken during shoots spanning six countries: Chile, Portugal, India, the Maldives, Canada and the US.
Decker began appearing in the Sports Illustrated Swimsuit Issue in 2006 and has appeared in every year since.