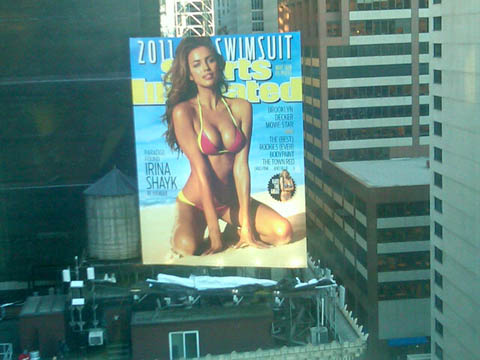 Russian-born model Irina Shayk has been revealed, on Twitter, as the Sports Illustrated Swimsuit Issue cover girl for 2011, if the leak is accurate.
The WAG, who is dating Cristiano Ronaldo, recently posed for La Senza. She has appeared in the past ﬁve Swimsuit Issues, though this is her ﬁrst time on the cover.
The ofﬁcial reveal will be on CBS’s The Late Show with David Letterman.
Rana Wardlaw, working for Starcom, said the cover was revealed at her ofﬁces as they ﬁlmed a segment featuring it. While exposed, a photograph of the cover was taken.
Brooklyn Decker was 2010’s cover girl and appeared in a preview last week for the Swimsuit Issue.
This may be the ﬁrst time the cover has been leaked on a social network prior to the ofﬁcial announcement.