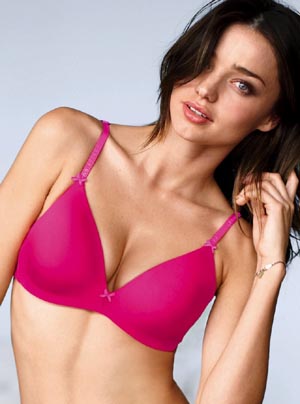 Above Miranda Kerr in an earlier Victoria’s Secret campaign.

The most searched-for celebrity name in this section of Lucire‘s website over the last 12 months was Miranda Kerr (left), model wife of actor Orlando Bloom.
It seems the bulk of queries for Miss New Zealand 2010 Ria van Dyke wound up on our site at some point, for her to score second place.
She was followed by Karen Elson and Jennifer Hawkins, thanks to reader interest and the fact that we had published articles on both ladies.
It was fortunate that my old friend, The Apprentice UK contestant, Paloma Vivanco, gave me an interview the week after her “ﬁring” on TV by Lord Sugar, as she was the ﬁfth most searched-for name on this section of our site.
Miss Universe Sweden Michaela Savic and Miss France Laury Thilleman were next, thanks to interest in pageants in their nations. Former Miss World, and acclaimed actress Aishwarya Rai, was eighth, buoyed by a growing Indian readership.
Jimmy Choo designer Tamara Mellon and supermodel Kate Moss were ninth and tenth respectively.
Surprisingly, Adriana Lima and Lady Gaga slipped—this may be to do with how the search engines position Lucire with any given query. Also, they had relatively few mentions in Lucire over the last 12 months. Our sample is far smaller than what Google has to work with for its annual Zeitgeist, but we believe it still gives an insight into who were the “names” of 2010.
The names have changed a great deal since we published a similar list in March. Elson led the list then, but we have lost Stephanie Chaves-Jacobsen, Jennifer Garner, Lady Gaga, Gavin and Stacey‘s Joanna Page and, tragically, the late Alexander McQueen.—Jack Yan, Publisher