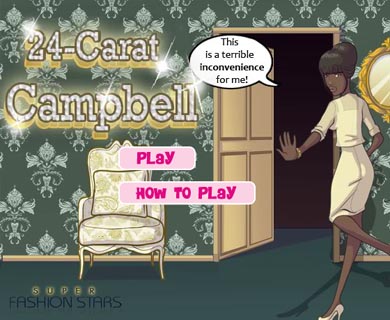 For most of the trial of the dictator Charles Taylor, who is facing war crimes’ charges in Den Haag, we decided not to cover supermodel Naomi Campbell’s bit-part in the case.
The main reason was that it trivialized the Taylor case. The man is accused of serious crimes against humanity, including murder, the use of child soldiers, and the mutilation of his own countrymen.
But the ﬂip side is that the case would have had far less attention if it were not for Campbell. Let’s face it: if it weren’t for her involvement, then fewer of us would have read about the story and felt uncomfortable with just what blood diamonds were being used for.
So earlier this month, we covered a bit of the story after she had delivered her testimony, and decided to do little more.
Though the following was hard to pass up as a commentary on her part in the trial.
London ﬁrm Blouzar has created an online Flash game called 24 Carat Campbell, where the object is to deliver blood diamonds and other gifts to Campbell’s character.
The object of the game is: ‘Try and deliver diamonds to Naomi! She gets gifts all the time, even at night! When Naomi needs a gift you’re holding, click it and deliver before she cries but don’t throw the wrong gift. Remember that she hates dirty-looking pebbles and is used to big, sparkling diamonds in a box.’
Campbell has provided satirists with material for the last few years with accusations of assault against her. Some witnesses in the trial have cast doubt on the veracity of her testimony, further damaging Campbell’s image. Twenty-four Carat Campbell relies on this tarnished image.
The game is located at a site called Super Fashion Stars, which is targeted at the Anglosphere as well as the Chinese market.