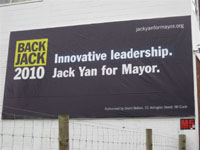 New Zealand readers will be seeing a few advertisements around this site relating to the local body election in Wellington. And perhaps, thanks to programming not always being precise, a few more readers outside New Zealand will notice them, too, although we have targeted them for this country alone. I think it’s time to explain them to you.
Long-time Lucire readers will know that I’ve put my name forward to be the next Mayor of Wellington. (We have not turned away any advertising from my opponents, incidentally.) Our publications will continue (in fact, we have additional editions to announce) and I will maintain a supervisory role, but the majority of my own time, if elected, will be dedicated to the people of Wellington and to give them the same opportunities that I was given as I grew my businesses here.
This is an important move because those of us under 45 have not had a mayor in this city who understands the importance of the role for quite some time. Turnout among younger voters is traditionally low, except for one time: when a 39-year-old, Mark Blumsky, ran, he managed to inspire more younger voters to get out. (I am 38.) He got there through citizen engagement, and people could see that here was a potential mayor who would continue being connected.
In 2010, I have no excuse to not be connected. I’ve made a big deal of staying in touch with everyone through Twitter and Facebook all year—as we reach the ﬁrst anniversary of this campaign on the 25th. And I’ve pledged at several meetings to continue doing so after I am elected in to ofﬁce. All the Tweets are mine, uncensored—sometimes uncensored to the point of being politically incorrect.
Fashionistas might get a few bonuses as several events have been brought before me, to see whether I think they ﬁt with my overall vision of Wellington. I think the best artistic and creative endeavours ﬁt with a capital that prides itself on its creativity, and which for too long has been left behind as the emphasis went elsewhere.
We’ll keep our events because Wellington does better with our creative talent, and we’ll grow our economy because Wellington punches well above its weight with our technological prowess.
But the one thing that I keep hearing, more so in the last weeks of the campaign, is the lack of transparency and the failure of politicians to engage early with people. Decisions are almost brought to Wellingtonians as faits accomplis, with citizens feeling disengaged.
This was the theme at several sessions of Residents 2010, a conference for residents’ associations earlier this year. Coverage of the event was to have been my op–ed for an earlier New Zealand print edition of Lucire, which had to have been delayed this year due to a decline in advertising. Ironical, then, that we seem to be continuing abroad—thank goodness for export markets, so we can keep companies going here. It’s a lesson to learn.
Beginning with a video from John Ralston Saul, of whose writings I am a huge fan, the theme was set. Cities might have lovely facilities now—if you can afford them. And somehow there is a tax shortage despite there being so much money. Saul blamed the specialization of management, because decisions were given to specialists, who failed to engage with citizens; and that he had little time for what he called ‘the efﬁciency dogma’.
Whenever I hear the word efﬁciency, I immediately think of Slater Walker and any argument made by various corporate raiders of the 1960s through to the 1980s; but besides that, Saul is right. There is insufﬁcient engagement in this city and in others with citizens, and politics is the one area where there hasn’t been enough democratization.
Session after session, the same theme emerged. Attendees argued that engagement would not open the ﬂoodgates to making a city less efﬁcient. That politicians feared losing power through engagement. That the Local Government Act does not empower local representatives to represent local people. That electronic media should be used for continued engagement, as an ongoing process to the exchange of ideas between Wellingtonians and our City Council.
We’ve seen democratization in business. Multi-million-dollar ad campaigns can become nothing if someone makes a viral video refuting their messages. And politics needs it, because the tools are there: the web is a great way to engage; and people do indeed have their say when bad decisions are made. How about engaging so early that we don’t make those mistakes, not just with pressure groups, but with all citizens? I don’t care if it’s Facebook, Twitter or some other service—if we can do it in publishing, by talking with you through this website, then why can’t a city?
No mayor is an island, especially when (s)he must be an advocate and a representative.
And that, in a very long-winded way, is the reason for these ads: a reminder that you can come to me with your concerns—early. So you know where to go to if you want to see what is being discussed in your next council. So there can be early engagement, in this case, prior to my potentially taking ofﬁce on October 10, 2010.
Everything I have done in life has been as a change agent. This publication only exists because I wanted to make fashion more accessible and its coverage fairer. The print editions only exist because I wanted to prove a point: that you could go global and be based in Wellington, New Zealand. And politics now needs a change agent: Wellington can be a globally competitive city while engaging with its weakest citizens—to make sure we are all included as the 2010s take shape.—Jack Yan