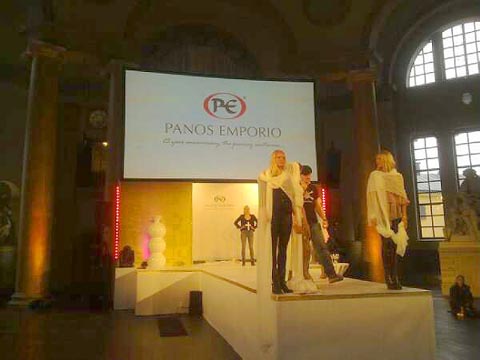 Tonight, Panos Emporio, Sweden’s leading beachwear label, celebrates its 25th anniversary with a grand party in Stockholm.
Panos Papadopoulos, whose odyssey has been told before in the pages of Lucire, will celebrate a quarter-century since his company’s founding with numerous celebrities at Skeppsholmen. A catwalk show and live entertainment are mooted for the event.
Panos had started his company in 1986 after emigrating to Sweden and chalking up an early success with a ground-breaking study on sociology in nightclubs.
His knowledge of sociology, entrepreneurial ﬂair, and sheer hard work—including repping his own range through Sweden in a used Datsun—built Panos Emporio into a multi-million-dollar enterprise whose swimwear sells in 40 countries.
The brand has built the careers of numerous models, long before they were famous. Panos often went against convention and cast models whom he felt had a je ne sais quoi, including Jannicke Björling, Victoria Silvstedt (at a time when buxom ﬁgures were not in vogue) and Janina Frostell. A female impersonator, Rickard Engfors, was hired to model a women’s swimwear line, showing that Panos was happy to push boundaries, though some of his distributors were not.
Panos also appeared this week on Swedish television in a local version of Secret Millionaire, Den hemlige miljonären, tying in well with the anniversary, and for the new season, he launches a clothing line—the biggest brand extension to Panos Emporio since its founding. He is also currently the owner of the Miss Sweden trade mark and had revamped the pageant to keep up with the times, including abandoning the swimwear segment.