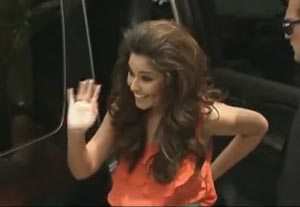 Now that the four-judge line-up to the US version of The X Factor has been unveiled—with Paula Abdul ﬁlling the fourth role—the media are watching how the new show unfolds.
By the time the show hits the US airwaves in the autumn, Cheryl Cole and Steve Jones will be known in the country—and Cole might get away with her Geordie accent, if the media exposure remains at this level between now and September.
Hitting the headlines is Cheryl Cole’s big hair and her new look, while Abdul shows up for her ﬁrst day at work on the talent show alongside Cole, L. A. Reid, and Simon Cowell.
Abdul says that she is ‘excited’ about the possibility of mentoring talent on the new series.