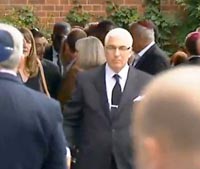 Amy Winehouse’s funeral has taken place at the Edgwarebury Cemetery in north London, with a cremation at Golders Green afterwards.
In attendance were celebrities including Kelly Osbourne and Mark Ronson. Mitch Winehouse, the late singer’s father, gave the eulogy, which included childhood stories and stating that his daughter had been happy in the days leading up to her death.
She had told him that she had had enough of drinking, and was looking forward to being with her boyfriend, Reg Traviss.
The eulogy concluded with Mr Winehouse saying, ‘Goodnight my angel, sleep tight. Mummy and Daddy love you ever so much.’ ‘So Far Away’ by Carole King was played afterwards.
The Winehouse family began to sit shiva earlier this evening at Southgate Progressive Synagogue.
Amy Winehouse’s ex-husband, Blake Fielder-Civil, was not in attendance. His request for leave from prison was denied.
Autopsy results on Amy Winehouse have been inconclusive and toxicology tests are awaited.