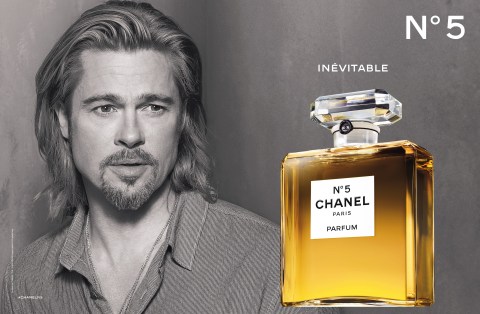 One of the most anticipated fragrance campaigns of the year, for Chanel No. 5 and starring actor Brad Pitt, which Geneviève Hole previewed in Lucire 28, has been released.
A release from Chanel features a quotation from Pitt, reading, ‘What’s important to remember about Chanel No. 5 is how revolutionary this fragrance is. When it was introduced, it broke all the rules by discarding meaningless ornamentation for an honest and open æsthetic and a scent which embodies liberation from trend, creating a fragrance which remains as modern today as it was in its inception. Chanel No. 5 has always been the most iconic women’s fragrance. The beauty of its success for all these years is both elegantly simple and complex at the same time.
‘That’s what I see being the appeal of this campaign; it goes beyond the abstract of emotion or beauty to evoke what is timeless, a woman’s spirit.’
Chanel’s angle is that the fragrance is ‘forever feminine’. It seems to be using Pitt’s judgement as an ‘assurance’ to customers that the scene is feminine. Pitt is the first male spokesman for the scent.
The photograph for the campaign has been taken by Steven Klein. There is a single headline, ‘Inévitable’, in the French version.
It is also the tagline for the commercial, which features Pitt standing alone and speaking to the camera, shown below.
Teasers were released last week with sound bites from Pitt.