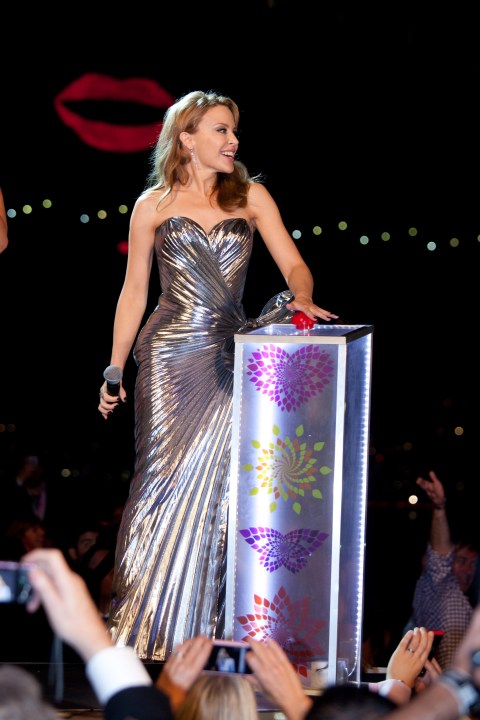 As previewed last week, Kylie Minogue sang in the Gregorian New Year in Sydney. The singer pushed the button to launch the fireworks’ display, which had been planned and designed by the Foti Fireworks company. Seven tonnes of fireworks, worth some A$6·6 million, were launched into the Sydney night sky, ushering in 2013 two hours after New Zealand.
In addition, thousands took part in Sydney’s interactive light show around the Harbour.
The theme of Embrace, created by Minogue, unified the light shows, with the participating public’s cellphones lighting up in different colours depending on their location, thanks to a Telstra app that was distributed prior to December 31.
‘The atmosphere was electric and it was a night I will never forget,’ said Minogue in a release. ‘It was the best feeling ever to be on the world’s greatest harbour surrounded by family, friends and the 1·6 million people gathered around the foreshore.
‘My New Year resolution is to spend more time with my family and loved ones and more time in Australia. I want to carry the theme Embrace into 2013. It’s such a beautiful notion to embrace loved ones, ideas, possibilities, the past and what the future holds.’
Last night’s Sydney Harbour Bridge Effect used 365 individual circuits and approximately 16 km of rope lights to create the Embrace icon and a graphic of Minogue’s lips.
Over 300 city workers cleaned up Sydney overnight, at a cost of A$290,000.
Hong Kong, known for its fireworks, also saw in 2013 with an eight-minute display at its harbour—though a grander one is expected in just under 40 days as the Lunar New Year arrives.