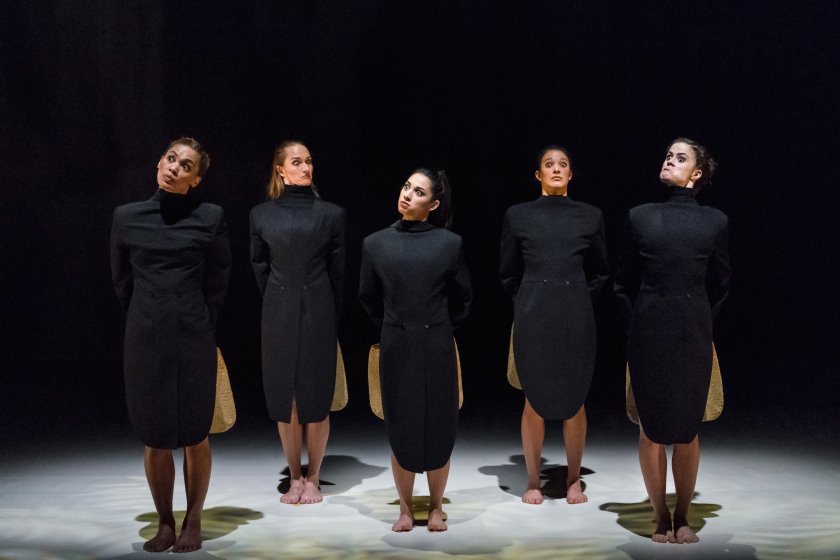 Mana Wahine, which had its première in June in Rotorua for Matariki, arrived in Wellington last night with the first of a brief series of performances (until August 16), with a powerful celebration of womanhood by the Okareka Dance Company.
Mana Wahine tells the story of Te Aokapurangi, who was captured in battle but returned later to save her people from slaughter.
The production began with the image of the storyteller, Tūī Matira Ranapiri-Ransfield, a descendant of Te Aokapurangi, appearing on the curtains prior to the show, a foretaste of the clever use of lighting and imagery projected on the dance floor and walls. Her evocative waerea incantation from the first scene led to powerful, purposeful choreography performed by five dancers, Bianca Hyslop, Maria Munkowits, Nancy Wijohn, Chrissy Kokiri and Jana Castillo.
Graceful and strong, the quintet were chosen for their experience as women and those from whom they have descended.
Mana Wahine blends different genres of dance, captivating the audience between its sets so seamlessly, and is a beautiful tribute to Te Aokapurangi while shining a light on the proud people in our country’s past.
Even without knowing the historical aspect one has to admire the authentic and sincere performances of the five dancers.
The production was inspired by a conversation between cousins Tui Matira Ranapiri-Ransfield and Okarewa artistic director Taiaroa Royal, on their ancestry and the Ngāti Ohomairangi of Te Arawa, namely the matriarch Kearoa and Te Aokapurangi of Ngāti Rangiwewehi and Tapuika. Both women were responsible for saving their people, demonstrating in New Zealand’s history the power and role of women.
Ranapiri-Ransfield researched the story, and wrote the lyrics and composed the music for the karanga, waerea and patere, and it is her voice that the audience hears. Victoria Kelly composed the rest of the score. Malia Johnston, with her extensive choreographic experience, co-authored Mana Wahine. Taane Mete directed Mana Wahine, calling it one of the ‘most rewarding experiences I have ever encountered.’ The collaboration between the talents, including technical production manager Jonny Cross, producer Rachael Penman, rehearsal director Natalie Clark and administrator Jesse Wikiriwhi, have resulted in a real, enriching production.—Jack Yan, Publisher

Mana Wahine runs till August 16, with daily performances at 7.30 p.m., and one matinee on Saturday at 2 p.m., at Te Whaea, New Zealand National Dance and Drama Centre, 11 Hutchison Road, Newtown, Wellington. Tickets are $20–$40, plus booking fees. Bookings can be made by telephone on 0800 BUY-TIX or visit www.eventfinder.co.nz.