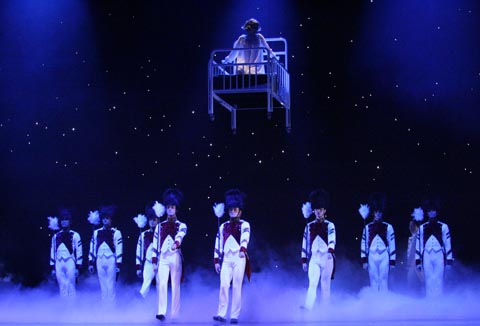 The Royal New Zealand Ballet’s The Nutcracker is a new take on the Tchaikovsky classic—set in a children’s hospital ward.
Both fashion editor Sopheak Seng and I called it ‘brilliant’ when we chatted about it post-show: it really is a fresh and entertaining take that’s cleverly directed and choreographed. Coupled with the Vector Wellington orchestra, which didn’t miss a beat, the production is a must-see.
The credit for the clever direction and choreography is that of artistic director, Gary Harris, who departs the Royal New Zealand Ballet after this production. Adrian Burnett provided additional choreography, while Kenneth Young conducted.
Tonia Looker, as Clara, and Paul Russell, as Fritz, were particularly expressive as the children who begin the ballet opening their presents on Christmas Day.
The audience, meanwhile, reserved most of its applause and delight for Sir Jon Trimmer as the Matron in the ward. Sir Jon was the Prince and the Russian for the Royal New Zealand Ballet’s ﬁrst performance of The Nutcracker in 1963.
And we must applaud the costumes, which brought The Nutcracker in to the 1930s, with smart men’s and women’s suiting and dresses.
Harris’s successor, Ethan Stiefel, will have big shoes to ﬁll when he takes up his role. Interestingly, Stiefel, too, recently staged and choreographed a version of The Nutcracker for the University of North Carolina School of the Arts. A recipient of the Statue Award of the Princess Grace Foundation (1999) and a Prix de Lausanne juror (2001), he takes up his role in September 2011.
The RNZB’s The Nutcracker is at the St James in Wellington till November 6, and travels around the country to Invercargill (November 11–13), Christchurch (November 17–20), Palmerston North (November 23–4), Napier (November 27–8), Auckland (December 1–5) and Takapuna (December 8–9).—Jack Yan, Publisher