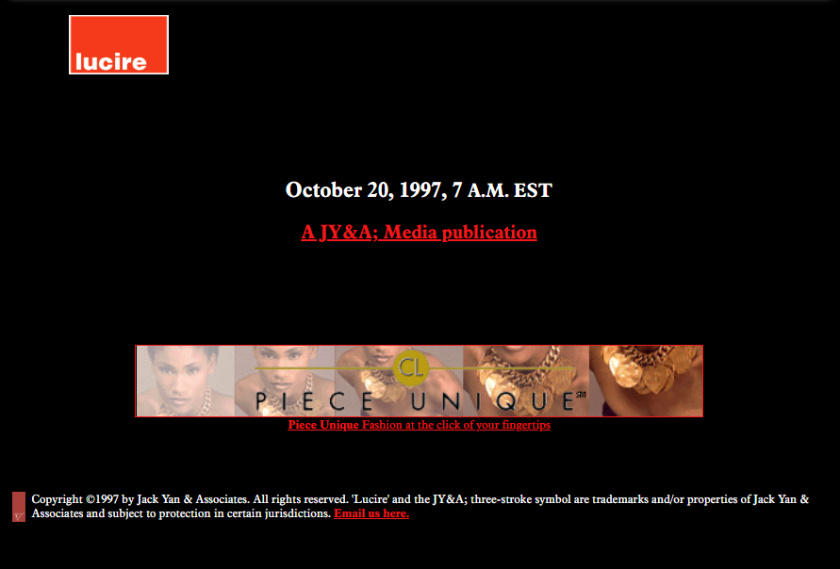 Above: Lucire’s holding page, as archived by the Internet Archive on October 17, 1997. There was no semicolon in JY&A Media; this appears to have been a bug from the Archive’s spider, as explained here.

Normally, I wouldn’t be browsing the Internet Archive for old Lucire pages, especially as I have all of them offline as well, but with our 25th anniversary year, it was interesting to peer back in time.

Of course I remember we had a holding page for Lucire as we awaited its launch in October 1997, but I didn’t remember what it looked like till a few days ago when I surfed to it among the Internet Archive’s pages. It was midnight on October 21, 1997 here when I uploaded the home page to make it all live, but, recognizing that the US was a massive part of the internet audience back then (over 70 per cent), the launch time was given in their eastern time zone.

I didn’t expect at that moment that we’d diversify into print and multiple sites; in fact, in those days there was little interest from the industry in getting press from the web.

Indeed, the Archive reveals that I had some other pages up before the holding one. These were online forms to get registrations of interest from readers, who could join a mailing list, and from designers; perhaps unsurprisingly in 1997, the latter stayed pretty quiet. Back then, you had to back up promotional efforts to the trade with something offline, but I didn’t know that.

What was interesting was what I wrote about why we were doing Lucire, from the archived page on July 7, 1997:

Why are we doing it? Because a lot of people said it couldn’t be done.

That sounds a lot like me. And people were saying it couldn’t be done, or if it could, no one would want to read about fashion online.

On our first day online, the Site of the Day Awards (SODA) in New Zealand gave us an award, but there had been a bit of arranging behind the scenes. Rus, who ran SODA, felt we were deserving, but he liked doing things in themes. We could get a SODA if we also put some other New Zealand fashion sites his way, which, in 1997, was a tall order, especially when you’re the first commercial magazine (and arguably the first magazine, depending on your definition, discussed below) in that space.

Naturally, I suggested the single-issue student mag Fashionbrat from Wellington Polytechnic, which made the cut on SODA for October 20; the World of Wearable Art (WOW) in Nelson had a site, too, which won the award for October 22. Talento, a modelling agency, won for October 23. One of those was New Zealand’s first fashion website. (To this day, WOW has no idea I was instrumental in getting them their award, which they used to post about on their home page.)

Rus wrote of us:

There is innovative use of the BACKGROUND images tag to support the text of the stories by placing the images “behind” the content rather then float it in an image tag of it’s own. Neat!

That first paragraph holds true today. When Lucire was a research project in 1996, there was no business case for a domestic-only magazine website, but there potentially could be if one expanded the reach to the Asia–Pacific, which was under-served at the time. And if I hadn’t taken that approach, I doubt we’d have had any success in licensing.

Interestingly, too, our format hasn’t changed hugely, with fashion, beauty, lifestyle and travel features. We didn’t start off as a catalogue or directory and changed tacks as a later site did; we had a magazine format from the beginning.

I was always proud of the Kiwi connection, especially at a time when many middle-aged adults thought in terms of the tall poppy syndrome, somehow believing that New Zealand wasn’t good enough to take things to the world stage. I had already been getting press coverage for my typeface designs, and found considerable satisfaction in proving that thinking so very wrong.

By 1998, we were getting stories from Europe (interestingly, from another guy called Rus), and we added New York coverage (with streetwear initially, before we began Fashion Week coverage) later that year. There was no need to stay Asia–Pacific, and readers were happy to get what they could.

We remained proudly Kiwi though: New Zealand designers made up a disproportionate amount of coverage in the early days, including the Fashion Four show in London in 1999. The best way to promote our own to a global audience was to make sure we were seen alongside global content.

Come 2003, the web medium seemed so limiting, and you could see that people wouldn’t pay what banner ads were worth given their reach. We had also been through the post-9-11 lull, when online ad budgets were slashed and we carried no paid ads from January to August 2002. I decided to do something no one in fashion publishing had done at that point: I took a web brand into print. As my friend Panos notes in his book, ‘No risks, no history.’ And that story has been told many times.