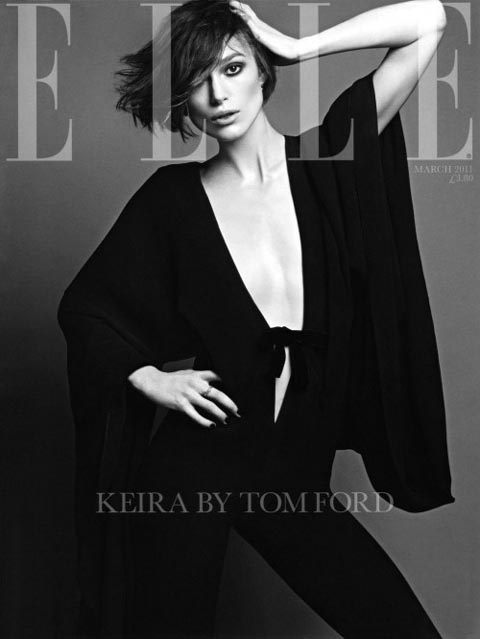 Above Keira Knightley, styled and photographed by Tom Ford, on the cover of Elle UK, March 2011.

Gracing the covers of Vogue Italia and Elle UK, Keira Knightley is back in the Zeitgeist.
Following her recent split from Rupert Friend, Keira is back on the Hollywood scene and causing quite a stir.
Gossip has been ripe with columnists suggesting that Knightley is getting quite close and personal with her fellow British heartthrob, Robert Pattison in Cosmopolis.
With columnists speculating that Knightley is on the prowl and that Rob is, just her ‘type’, is rather off-putting when it comes to the real topic of discussion, her career.
In the January issue of Vogue Italia, Keira Knightley talked about her very public career and her battle with dyslexia as a child. She explains that although she has had three years to reach the Hollywood summit, she still feels shy and insecure at times.
From her early début in Bend It Like Beckham (2002), Knightley has taken Hollywood by storm, and named the highest paid non-American actress—not bad for someone who suffered from dyslexia as a child.
Her parents, Will Knightley, and screenwriter mother Sharman Macdonald, explain in Vogue Italia that they were not shocked when their three-year-old daughter asked them for an agent.
It appears that a very young and determined Keira knew what she was getting herself into.
Knightley mentions how working as an actress is just like any other job.
She understands how important versatility can be in Hollywood.
‘In my line of work, fame lasts a minute,’ Knightley tells Vogue Italia. ‘People tend to lose interest in a face; every second a new one appears.’
She mentions that she has performed on stage to show her diversity, while in ﬁlm, she has completed her latest role in A Dangerous Method.
Knightley says she has remained one of the top-earning actress in Hollywood by remaining true to her sense of self and style: ‘Scruffy is my style.’
In the March issue of Elle UK, Knightley tells how she’s grown up on one level of her life and behind on her social skills.
‘Going into a room full of people at a party I ﬁnd one of the most terrifying things in the entire world. I normally last about 10 minutes. …
‘I went to one the other day. Standing in the corner, couldn’t ﬁnd anything to say, just ran out. Awful. My friends are like: “What are you—an idiot? What’s the matter with you?” “I just can’t. I get completely paralysed with shyness, just totally paralysed.”’
More remarkable is that the photographs have been shot by Tom Ford himself. It’s the sort of treatment that doesn’t happen unless Knightley was expected to resonate with readers as 2011 began.
It’s certainly going to help build her career in time for a 2012 ﬁlm which some might argue should not be remade: Knightley is set to star in the new adaptation of My Fair Lady playing Eliza Doolittle.
Produced by Joe Wright, with a screenplay by Emma Thompson and produced by Duncan Kenworthy, this is sure to set Knightley’s career soaring far and beyond anyone’s expectations.
My Fair Lady is set for release in 2012. With this iconic a story—G. B. Shaw’s Pygmalion, not to mention the even more iconic musical starring Audrey Hepburn—being remade, Knightley won’t be disappearing from the gossip columns and fashion pages any time soon.—Snjezana Bobič