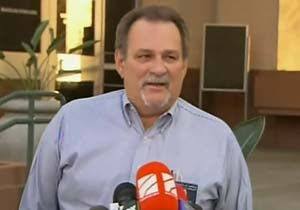 Los Angeles County Coroner Assistant Chief Ed Winter (left) told reporters awaiting news on Whitney Houston the following at a press conference yesterday.
‘We have concluded the autopsy on Miss Whitney Houston. It was concluded today.
‘There will be no cause of death at this time, as it is pending toxicology. That could take up to six to eight weeks. At this time the cause of death is deferred and we are ﬁnishing with all of our testing. There will be an ongoing investigation.
‘Beverly Hills requested a security hold on the case, so there will be no additional information put out as far as what was discovered in the room, any details of that nature,’ he said.
‘There’s reports that she maybe was drowned or, did she overdose? No, we won’t make a ﬁnal determination until all the tests are in.’
Winter conﬁrmed rumours that Houston ‘was found in the bathtub. That was put out by Beverly Hills PD.
‘I believe somebody removed her from the bathtub and the paramedics did CPR on her. There was no visible signs of trauma, and foul play is not suspected at this time.
‘What and if any prescription drugs or illegal drugs would be found in her system, so that’s what we will be looking for also.
‘I’m not going to comment on any of the meds or prescriptions that were obtained. As I said [there’s] a security hold.
‘We’re looking at all aspects of the case. Hopefully maybe by Wednesday or Thursday of this week I may be able to give you an update,’ said Winter.
He explained that security holds were not uncommon, and were used on the cases of Michael Jackson, Brittany Murphy and Corey Haim, ‘all high-proﬁle cases and a lot of times on in-custody or ofﬁcer-involved shooting cases or high-proﬁle murder cases. We’ll put on a security hold to give law enforcement agencies to do further investigations.’