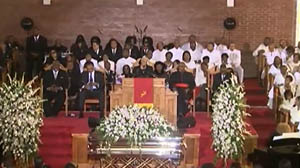 The sombre occasion of Whitney Houston’s funeral in Newark, NJ, has been carried by international media and streamed online.
Some 1,500 people attended the service at the New Hope Baptist Church, where Houston herself performed in the gospel choir run by her mother, Cissy.
The current gospel choir opened the funeral, and speeches from Houston’s cousin Dionne Warwick, producer Tyler Perry (who paid to bring Houston’s body to New Jersey), and The Bodyguard co-star Kevin Costner followed.
Songs from Kim Burrell (singing ‘A Change Has Got to Come’ with modiﬁed lyrics to honour the late singer), Alicia Keys (‘Send Me an Angel’), Stevie Wonder (‘Love’s in Need of Love Today’), R. Kelly, BeBe and CeCe Winans were also performed. Illness prevented Aretha Franklin from performing.
Houston’s ex-husband Bobby Brown had arrived, but departed soon afterwards due to a disagreement about his seating, according to AP.
The funeral ended with Houston’s signature song, ‘I Will Always Love You’, as her cofﬁn was taken out of the church.
She will be buried alongside her father, John Russell Houston, at Fairview Cemetery in Westﬁeld, NJ.
Results of toxicology tests on the 48-year-old star, who was found dead in her Los Angeles hotel room last week, are still pending.

‘I Will Always Love You’