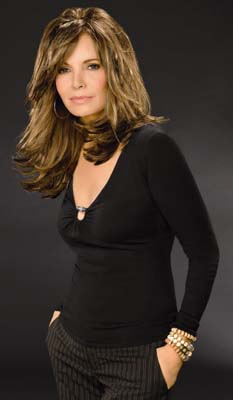 There’s a lot of talk about supermodels such as Elle Macpherson and Claudia Schiffer continuing to model and scoring new campaigns, not to mention Vogue Paris’s new Cindy Crawford shoot, but the media haven’t really noticed celebrities in their 60s contributing to the Zeitgeist this year.
On TV screens in many countries is Olivia Newton-John, whom we covered in this magazine for Breast Cancer Awareness Month. Newton-John is advertising Nintendo, recently remarried, and turned 60. A stage revival of her 1980 ﬁlm Xanadu had rave reviews on Broadway.
The other celebrity from the same era who has been getting more press than we have seen in many years is Charlie’s Angel Jaclyn Smith—whom many regarded as the most beautiful of the TV series. Smith, now 61, has lent her name to a K-mart range of bed and bath fashions which hit US stores in early September. Last month, Paula Young débuted its Style by Jaclyn Smith collection, consisting of hair products ‘from hair volumizers, which integrate with a woman’s natural hair to provide volume and lift, to falls, clip-ons, headband styles and full-coverage wigs.’
We’re thrilled that these women still are such strong drawcards for companies and proof that one can be beautiful at any age.