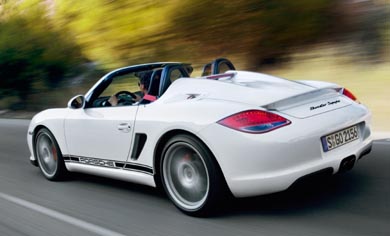 In 1953, Porsche showed its original racing 550 Spyder, a lightweight roadster—a model which could count James Dean as one of its owners. In the 1980s, to get more mileage out of the 911 line, the company released a Speedster version, inspired by the 356, with a lower windscreen. This time around, Porsche has released a lightweight version of the Boxster blending these principles, called the Spyder and coming in at 1,275 kg. It’s a more involving sports’ car and rids the feminine image of the original once and for all. While we had the image above from Porsche early, one of the below videos gives an idea of the lovely sound of this new model. Safety-wise, things have come a long way since the 1950s.

4 thoughts on “Porsche Boxster Spyder is the butch one”