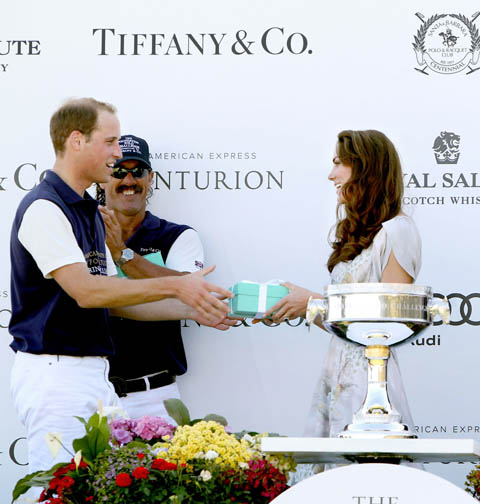 The Duke and Duchess of Cambridge have departed the US after a popular North American tour. As well as a star-studded event for the BAFTAs in Los Angeles, which we reported on yesterday, Prince William played a game of polo at the Santa Barbara Polo & Racquet Club on Saturday, where the Duchess presented her husband a player prize in a Tiffany Blue Box. She also presented the 45 cm high trophy at the event.
The royal couple also visited the Inner-City Arts academy on Skid Row, and a fund-raiser for the Tusk Trust, a conservation group.
Their ﬁnal event was for Service Nation: Mission Serve, a group helping veterans ﬁnd jobs, in Culver City.
Reports were very favourable toward Prince William among the US veterans, who found a connection with his RAF service as a search-and-rescue helicopter pilot.
Also in Los Angeles, David and Victoria Beckham have welcomed a baby girl into their lives, weighing 7 lb 10 oz at birth, and arriving 7.55 a.m. yesterday (PDT). Both mother and daughter are in good health. The daughter has been named Harper Seven Beckham, according to David Beckham’s Facebook page.