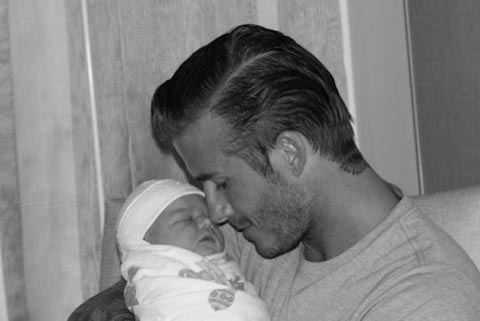 Above David Beckham with his daughter, Harper Seven, a fortnight ago.

It’s Hennes & Mauritz (H&M) that will collaborate with footballer David Beckham on a new fashion line, the Swedish ﬁrm announced this morning.
Described as a ‘long-term partnership’, H&M will release the David Beckham Bodywear range in 1,800 stores in 40 countries.
New items will be released each season, with the ﬁrst coming on February 2, 2012.
‘Over the past year, I’ve been developing my Bodywear range with my team and I’m extremely positive about what we have designed and produced,’ Beckham said in a release. ‘The ﬁnal piece in the jigsaw was a retail partner who has the vision and capability to distribute these products globally. In H&M we have found the perfect partner to collaborate with going forward. I’m excited and looking forward to showcasing the range to H&M customers from February.’
The David Beckham brand was developed by Beckham and business partner Simon Fuller earlier this year.
The latest news follows various ventures into fashion by Beckham’s wife, Victoria, who has her own label and consults for others.