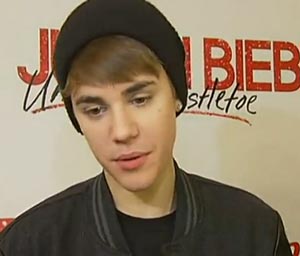 Hot on the heels of his double MTV VMA win in Belfast, Justin Bieber has switched on the lights at two Westﬁeld malls at Shepherd’s Bush and Stratford City.
Bieber turned the lights on at Shepherd’s Bush ﬁrst before being ferried away by helicopter to Stratford City.
He was joined on stage by the Wanted, Reggie Yates and teens from the Teenage Cancer Trust, which the events beneﬁted.
In a follow-up interview, the teen pop idol talks about his new Christmas album, Under the Mistletoe, and how he was never told about Santa Claus as a child.
He plans to spend Christmas with his family.