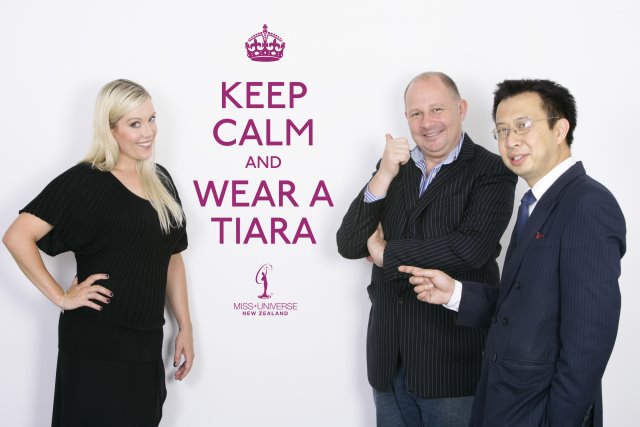 A new team has been awarded the licence for Miss Universe New Zealand, comprising veteran TV producer Nigel Godfrey, experienced make-up artist and well respected personal trainer Evana Patterson, and Lucire publisher Jack Yan.
The consortium was awarded the licence earlier this year, and broke the news today.
‘The search for Miss Universe New Zealand 2013 will start within a few weeks and we will travel the length and breadth of the country to find the winner,’ says executive producer Nigel Godfrey.
Registrations are via nextmissnz.com, with a low registration fee of $10. Fifty per cent of the received amount will go to Variety, the Children’s Charity.
A second stage will see a selected group of entrants head into the regional finals, with those young women heading into a two-day workshop. These will be held up and down New Zealand, where entrants will receive training with professionals in the areas of modelling, TV presentation, make-up and other related areas.
Godfrey, who first ventured behind the lens in London in 1986 when he worked for the Miss World Group and Thames TV on the international final of Miss World, says television cameras will follow the process.
As with The X Factor, New Zealand’s Got Talent and Idol, the New Zealand public will have a say in who is going to be Miss Universe New Zealand 2013.
A red-carpet gala final event is planned for September, with organizers confident that it will be broadcast on television nationally.
Yan, who serves as general counsel for the consortium, says, ‘We have the perfect team to bring Miss Universe New Zealand in to the 21st century, by applying integrity and transparency to the competition. It’s an exciting time, transforming this competition into something that involves all New Zealanders.’
‘Historically, a Miss Universe New Zealand winner became an instant celebrity and we will return that status to the title,’ says national director Evana Patterson. ‘The winner will enjoy a very busy and productive year-long reign working with both Miss Universe and Variety, the Children’s Charity.
New Zealanders aged between 18 and 27 should visit the official website at www.nextmissnz.com.

One thought on “Keep calm and wear a tiara: Miss Universe New Zealand is back”