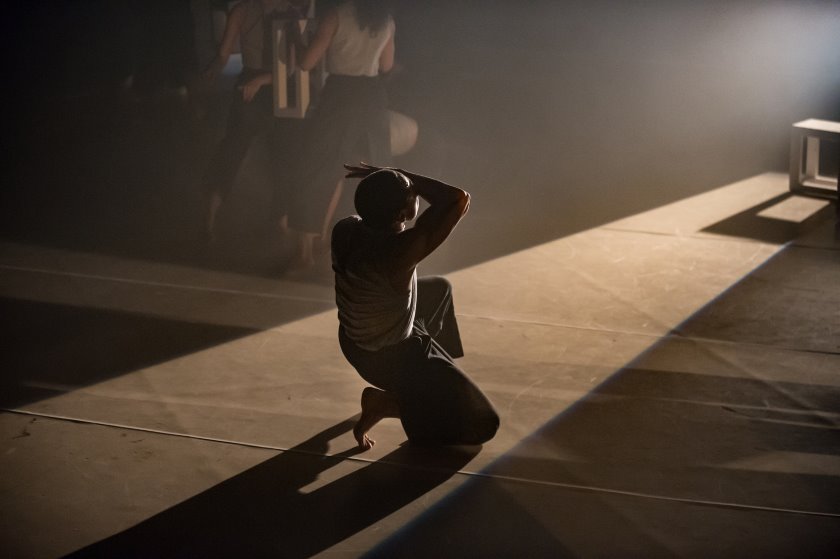 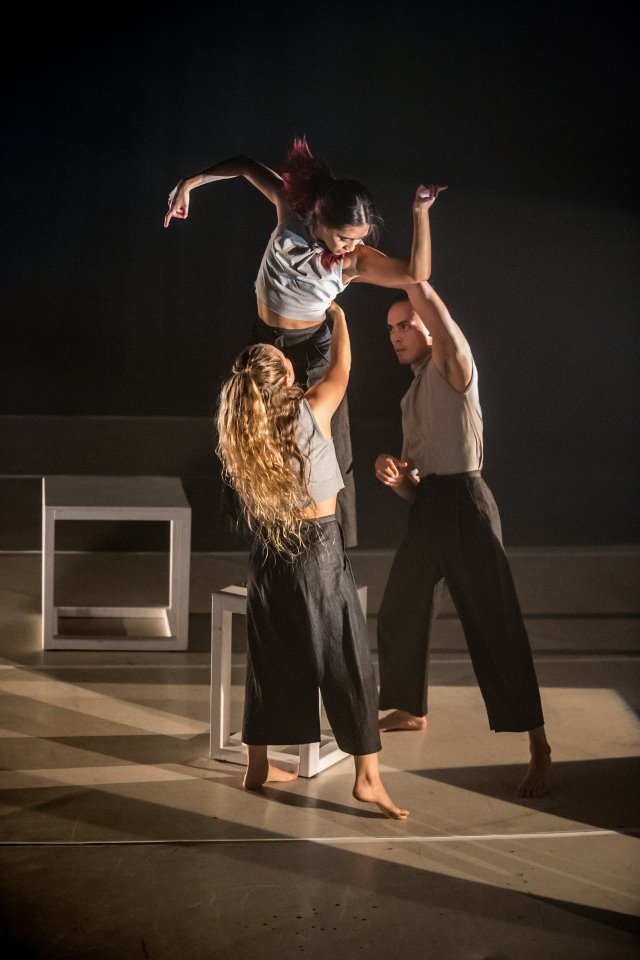 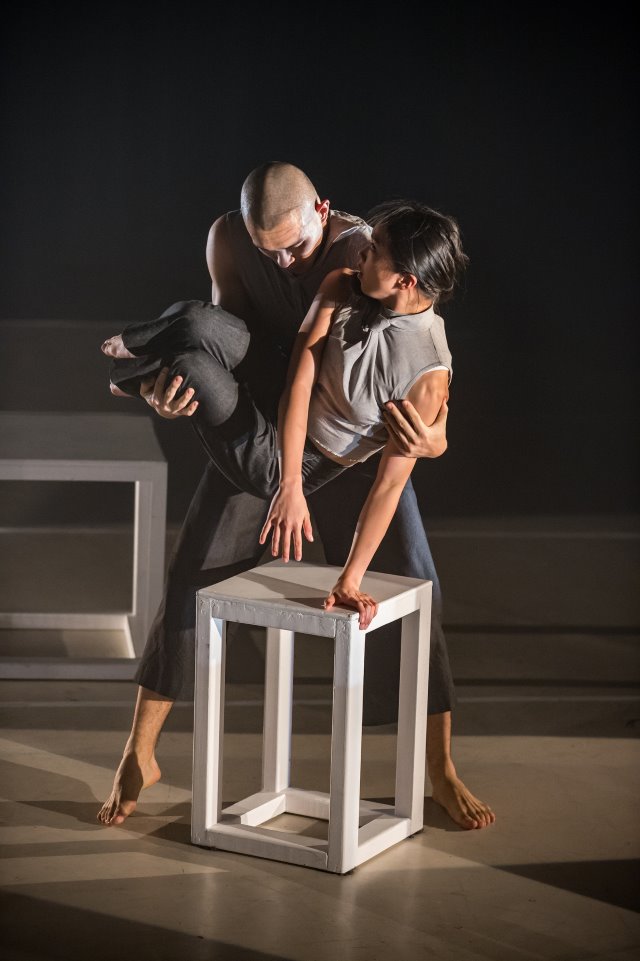 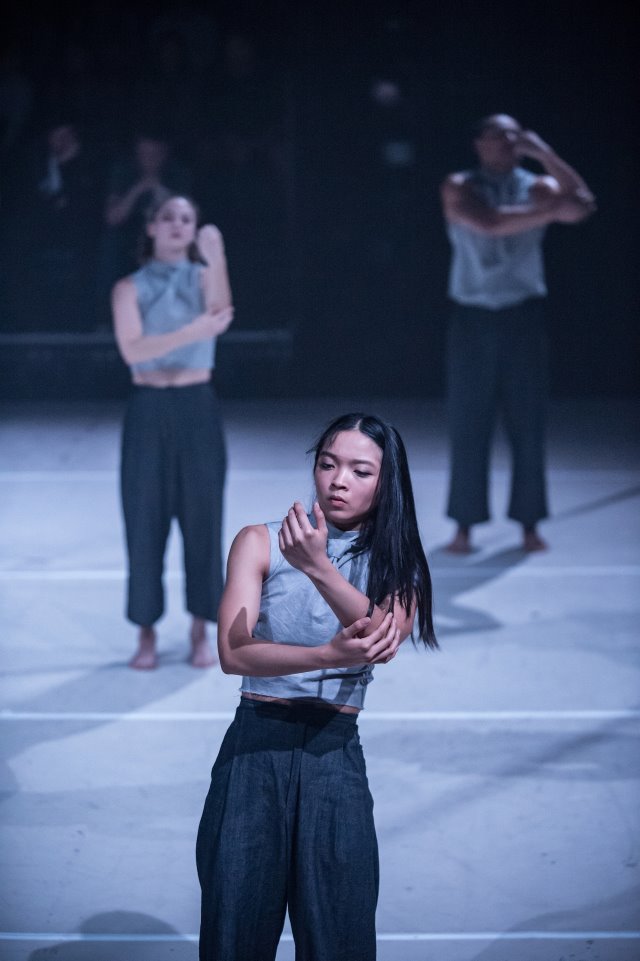 The New Zealand School of Dance’s Choreographic Season for 2016, Scope, blended its 10 performance so seamlessly, and with related themes, that it worked well as a single, larger piece, despite the many talents and styles involved in choreography, music and dance.
Each time we attend an NZSD performance, we’re always impressed by how they mix things up. Sometimes, it’s in the style of dancing or the changes to the venue. This time, they’ve surprised us yet again by not having breaks between each work, allowing them to flow naturally. Other than at the beginning, when half-dressed dancers emerged on stage in a row, only to have their neatly folded outfits fall from the sky, there were also no costume changes.
Scope’s notes hint at the related themes, all centring on the energies that drive life on Earth, and how humanity can be destructive, but also how it can unite and bring people together. The flow did mean it was sometimes difficult to see when one performance finished and another started—this is not meant as a negative criticism, because the effect is that the audience became particularly engrossed.
The performances flowed so seamlessly thanks largely, we believe, to the collaborative processes by the 10 graduating students of the New Zealand School of Dance, who created and performed their own works, cooperating with lighting and sound designers as well as fellow students in following years. It was particularly immersive, more so than the 2015 season that Lucire thought very highly of.
In a release, the show’s coordinator, Victoria Colombus, herself an alumna, noted, ‘This year the New Zealand School of Dance students and Toi Whakaari students are cultivating a very collaborative working process. They have been working together to investigate overriding themes and how they can utilize different elements of stagecraft and performance to sew together these common threads.’ It worked.
‘Trophics’, choreographed by Tristan Carter with music by Te Aihe Butler, involved the entire cast, essentially evolving. The first scene showed them essentially running on to the stage but as they progressed, their moves became more complex, as though they discovered they had more limbs and abilities. This evolved into the next performance, printed in the programme with a blank box and the cubed sign as its title, with the introduction of white boxes as props but signifying that we can find peace among our busy lives. Christopher Mills’s ‘Box Cubed’ (for ease of typesetting here) concluded with female dancers calling out to others scattered among the audience, the matriarchy evolved into the patriarchy with ‘Obelus’, a male-exclusive performance that mixed martial arts with the flow of dance, examining themes of rivalry, the toppling of leadership, and the resulting power vacuum. There was thoroughly enjoyable choreography by Jag Popham.
From here the performances became more otherworldly—and one can see the evolutionary theme continue into a more technical arena. ‘The Private Sphere’ introduced themes of contrast: ‘Plastic fruit and tending flowers. Air freshener and painted landscapes,’ read the programme, but we saw it as humanity’s attempt to introduce technology, but not always in a pleasant way. Dancers mimicked robotic movements as they portrayed artificial materials; could the theme have been the draining of humanity from our everyday lives? From Isaac di Natale’s ‘The Private Sphere’, we moved into Breanna Timms’s ‘Atlas of Intangible’, where the movements became fluid again, almost to show that advancements can see us claw back our humanity. Timms’s idea was to show the connections between all life through energy, how the actions of one influence another, and this was done with great beauty and more tradition in the choreography, helped with music such as Estonian composer Arvo Pärt’s ‘Summa for Strings’.
Samuel Hall’s ‘Come along and Feel the Kairos’, a reference to that perfect moment, involved audience members in the front row (Lucire’s second-row seat meant the note-taking continued), who became part of a mass performance. Dancers in the centre connected while one remained outside the lines formed by the audience and their guides; and despite the presence of amateurs on stage there was a flow that held our attention.
‘Blight’, choreographed by Tiana Lung, had many layers that tied back to earlier themes of technology and humankind’s attempts to quell nature as a result; a dancer representing new life is controlled and quashed by existing life forms. ‘Shaving a Cactus’, choreographed by Holly Newsome, again introduced a technological theme (helped by Crooked Colours’ ‘Step (Woolymammoth × Tsuruda Remix)’ as the soundtrack) and synthesized voices which dancers. Te Aihe Butler’s music editing for Jessica Newman’s ‘XXX’ took us back to the start thematically, with sound effects that were basic and raw. The whole cast returned for an energetic finalé in Isabel Estrella’s ‘Temenos’.
Scope, the New Zealand School of Dance’s Choreographic Season for 2016, runs from May 20 to 28 at Te Whaea, the National Dance and Drama Centre, in Newtown, Wellington. Tickets are priced from NZ$12 to NZ$23; bookings and further information can be found at the NZSD’s website at www.nzschoolofdance.ac.nz.—Jack Yan, Publisher 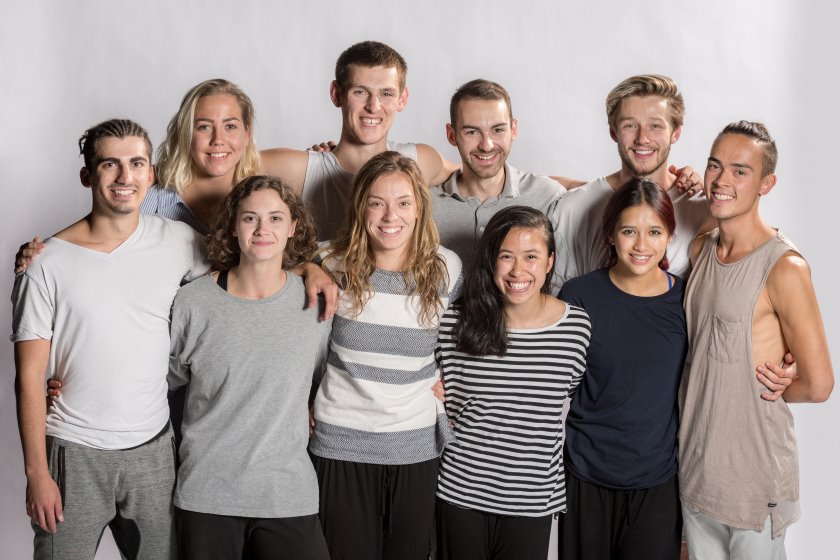 Above: The third-year contemporary students at the New Zealand School of Dance for 2016.