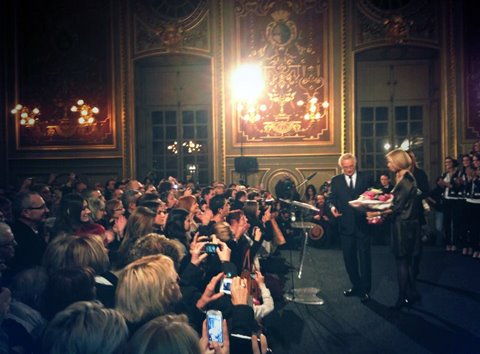 Above Miss France CEO Sylvie Tellier at the mayoral reception at the Palais des Ducs.

After touring Sri Lanka, the 33 Miss France 2014 contestants arrived in Dijon after a 30-hour flight on Saturday. The final will be held at the Zénith at Dijon on December 7.
The interest from French media steps up a notch, especially with the welcome at the Palais des Ducs, where contestants met François Rebsamen, the mayor of Dijon, as their first official event in the city.
Rebsamen goes so far as to call Miss France ‘the only event where the whole of France unites’ in his public address.
The reigning Miss France, Marine Lorphelin, along with the organizing committee, have also arrived at the Bourgogne capital. The Holiday Inn Toison d’Or Dijon is providing accommodation.
The Miss France telecast will be broadcast live on TF1, and tends to attract a 40 per cent share in France.
The rival pageant, Miss Prestige National, set up by former Miss France organizer Geneviève de Fontenay, will not have its final until January 12, at the Lido de Paris. Both sides had reportedly reached a settlement after three years of battling for national attention, in the so-called ‘guerre de Miss’. As Lucire noted last year, the rival pageant was fighting a losing battle, with 36 times as many readers interested in Miss France 2013.