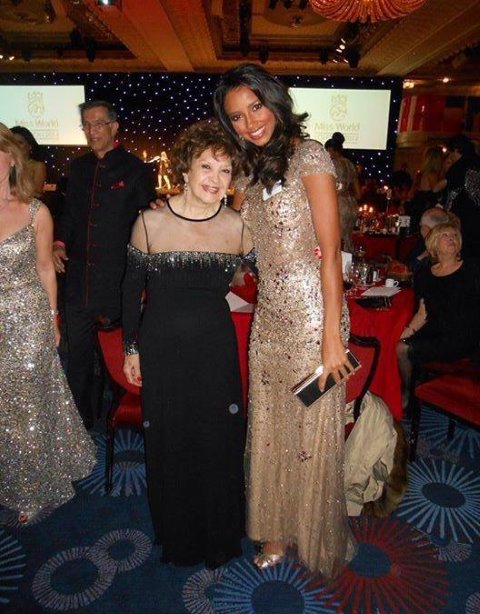 Above Miss France 2014, Flora Coquerel, with her 1953 predecessor, Denise Perrier, who also took out the Miss World title.

Miss France 2015 will be announced tonight from the Zenith in Orléans with a live broadcast on TF1, starting at 8.55 p.m. local time.
Last year, Miss Orléanis, Flora Coquerel, was crowned the 2014 winner, watched by an audience of 8·3 million on television.
Thirty-three contestants, aged between 18 and 24, are competing for the title. Over the previous month, they have been to Paris and Punta Cana (in the Dominican Republic), before heading to Orléans.
There have been changes to the judging line-up, after actor Alain Delon resigned in the wake of comments supporting the National Front. Patrick Bruel has taken his place as the president of the jury, joined by Olympic swimmer Laure Manaudou, singer Shy’M, TV and radio host Jean-Luc Reichmann, humorist Stéphane Rousseau, comedian Philippe Bas and Miss France 2008 Valérie Bègue.
One constant has been the presence of MC Jean-Pierre Foucault, who will host for the 20th time. In one departure from the past, viewers will determine the winner and two runners-up with telephone and SMS voting. Previously, they only chose the top five.
The lead-up to the final on Saturday night has been controversy-free after the settlement with former Miss France organizer Geneviève de Fontenay last year.
The only controversy of note in 2014 has been the delayed broadcast for the Réunion Islands and French Polynesia, meaning they cannot participate in live voting.
De Fontenay’s rival competition, Miss Prestige National, takes place on January 18, 2015, in Kirrwiller, near Strasbourg.