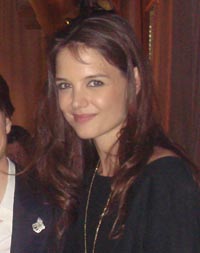 Katie Holmes (left) is the new face of Ann Taylor, The Hollywood Reporter revealed today.
The actress will appear in the label’s spring 2011 advertising campaign, débuting in March. It has been shot by Tom Munro.
The Hollywood Reporter has the ﬁrst image of Holmes in the campaign, wearing a nautical-themed blue jacket and trousers.