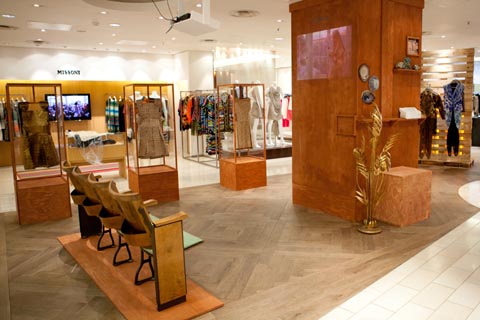 Rodarte currently has its States of Matter exhibition at Los Angeles’ Museum of Contemporary Art (MOCA), but Harvey Nichols says that UK shop-goers need not feel as though they’ve missed out.
It has an installation on the ﬁrst ﬂoor, created by set designer Fiona Leahy, with an abundance of northern Californian redwood and a 1970s’ feel, as a tribute to Rodarte’s Mulleavy sisters, Laura and Kate.
A viewing gallery is at the centre of the installation, projecting a short ﬁlm, The Curve of Forgotten Things, a collaboration between the sisters and director Todd Cole, and starring Elle Fanning. As with the installation, the ﬁlm is inspired by northern California and the ’70s. ‘It’s about this girl who exists in this strange place outside of time. She’s digging up things form the land and the past, and she offers them to the sun,’ says Cole.
Harvey Nichols has the spring–summer Rodarte range in stock and has worked some of the dresses in to the installation, suspended from wooden poles. They are available to special order.
In celebrity news, Paris Hilton is being sued by German insurance ﬁrm Allianz over jewellery borrowed in 2007 that she allegedly did not return.
The jewellery, worth £37,500, was initially reported stolen but was later found and returned in 2010. The company says Hilton has not returned the items.
And if you haven’t developed X Factor judge fatigue yet—it’s looking more and more like this is being dragged out for publicity purposes—there is news that Fergie is a possible contender for the American version of the show.