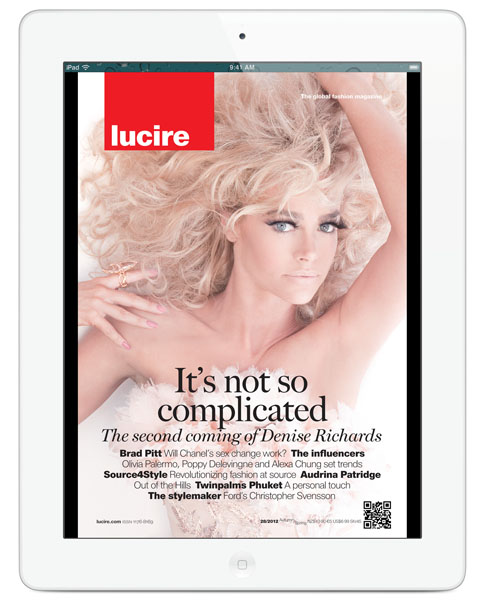 As officially announced in time for our 15th anniversary, Lucire is now available on the Ipad (and Iphone and Ipod Touch) as well as Android. You can check out the Ipad app here, available via Magzter at the Apple App Store, while Google Play has our Android app. There is a charge of US$6·99 per issue, and we are doing a deal on multiple issues. You can check out the contents here.
While we were projected to enter the tablet space earlier, it’s taken this long for the technology to catch up with what we wanted to do. We’re still playing with the apps and building more things in to them, but rest assured we’ll be pushing the envelope gradually, as we have for much of our existence.
Recent features on the main part of the Lucire site, for our readers using RSS, keep you up with the latest from around the world. From Finland, designer Tiia Vanhatapio talks to our new correspondent Maranda Bodas about her designs; in California, Elyse Glickman and Elva Zevallos check out Sue Wong’s spring–summer 2013 collection; and from New Zealand, Greg Jennings’ video of Fashion Week there is now up, compiling the shows into a single video, complemented by Sopheak Seng’s trend report.
Earlier at New York Fashion Week, we went to the event that kicked off the collections: the ninth annual Style Awards. Lola Saab and Maitland Waters attended the function for Lucire. Lola also went to Javits to see the latest accessories. Meanwhile, Fran Drescher has been raising more awareness of her Cancer Schmancer charity, as Elyse and Cheri Fox discover.
Jack Yan drives the BMW 320d Sport Line, with Efficient Dynamics, and notices just how much fuel he’s managed to save with its Eco Pro mode; and he also checks out the Renault Mégane III, a more humble—but still very capable—hatchback. As mentioned last week, he’s also penned a piece on the cars of James Bond. David Machowski talks to Roger Salloom, a singer–songwriter who’s been behind some great hits, but who has been able to stay out of the limelight.
Guatemala was a bit more of an exotic destination, and that’s where our Milano photographer Thomas Salme found himself, shooting Miss Teenager Universe.