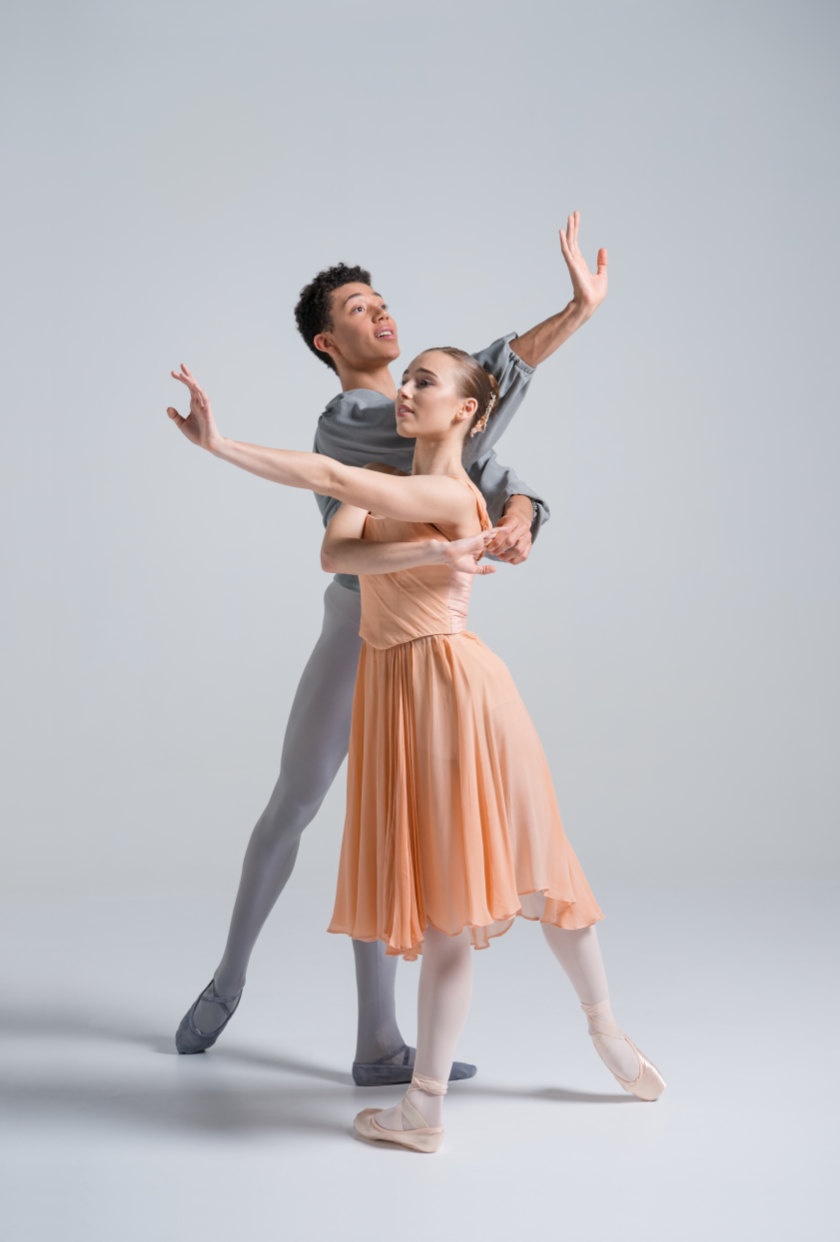 Above: Hosanna Ball and Saul Newport.

The New Zealand School of Dance has traditionally held a highly regarded graduation programme, and this year’s was the grandest we’ve seen, with the school celebrating its 50th anniversary.
Held at the St James Theatre, opening night saw Governor-General HE Dame Patsy Reddy attend, along with former Royal New Zealand Ballet artistic director Francesco Ventriglia. Members of the RNZB performed alongside NZSD students and graduates, demonstrating the close links between the two organizations.
We bumped into former RNZB dancer Qi Huan, who had trained all those performing ballet numbers in the graduation show, and the expertise showed. The School of Dance has traditionally provided dancers with the foundations that they need, and we’ve seen past graduates go on to become fully fledged and successful members of the Royal New Zealand Ballet.
Of course, it isn’t just in ballet, but all genres of dance, as was evidenced by the programme, which brought together a number of favourites (notably the two RNZB numbers, the wedding pas de deux from Don Quixote, and In the Middle, Somewhat Elevated) and numbers new to us (S. U. B. [Salubrious Unified Brotherhood, choreographed by NZSD alumna Victoria Colombus, with Connor Masseurs and Toa Paranihi; and Curious Alchemy, choreographed by current RNZB dancer Loughlan Prior).
The opening showed six dancers, four at levels 1–4, and two full-time students, Hosanna Ball and Saul Newport, on three sets of ballet barres, reminding us that a career in dance can begin at a very young age, and that those in the profession can literally have had decades under their belts before they are 30.
Tempo di Valse, a short ballet set to a Tchaikovsky score, brought out a large group of NZSD dancers, and was a warm-up of sorts for the audience. The music is the ‘Waltz of the Flowers’ from The Nutcracker, and helped lighten the mood. Mali Comlekci followed up with a solo in Aria, choreographed by Val Caniparoli to music by Händel, a beautifully performed number with a mask its only prop. Comlekci’s movements were fluid, and he had a confident presence on stage—it is through solos and duets that we got to focus on just how well trained the graduates are.
Curious Alchemy followed, an inventive and flowing ballet for two male and two female dancers requiring close coordination and synchronicity. It was originally commissioned by the School of Dance to perform at the Assemblée Internationale 2017 in Toronto, where Saul Newport, Jaidyn Cumming, Song Teng and Tabitha Dombroski appeared; for the graduation programme’s opening night, Clementine Benson took Dombroski’s place. Prior is certainly a name to watch: Curious Alchemy had a modern energy with its pace and delight.
We loved NZSD alumna Sarah Foster-Sproull’s Forgotten Things, which also featured on the programme tonight, and was even more enjoyable the second time around. Twenty-three sets of arms and hands contrasting against black outfits became wings, antlers, and spines; legs churned away in unison to create creatures that were at once grotesque and beautiful. We knew that Foster-Sproull’s inspiration was cell division, phagocytosis and metamorphosis, translating the microscopic to human size, but what we caught this time was the human element to the story, of a person’s acceptance, escape and absorption; and of family structures and hierarchies. It was particularly mesmerizing.
The wedding pas de deux from Act III of Don Quixote was performed by the RNZB’s Mayu Tanigaito and Joseph Skelton to much acclaim: as Basilio, Skelton showed great strength in the adagio, raising Tanigaito’s Kitri overhead twice; Tanigaito accomplished the dizzying 32 fouettés in the finalé without fault, every bit as enjoyable as her 2015 opening night performance that we reviewed.
It was a simpler pas de deux that followed, as Olivia Moore and Calum Gray performed their dance from Sir Kenneth MacMillan’s Concerto, set to the music of Shostakovich. Two live pianists performed the score at the back of the stage, with Moore and Gray having the difficult task of opening the second section of the programme. They are set to do well in the profession.
S. U. B. was the second number of this section: Connor Masseurs and Toa Paranihi performed, shifting their bodies dramatically as though frames in film were missing, going through four different musical numbers (Tony Newley and Leslie Bricusse’s ‘Feeling Good’ the most recognizable, mainstream hit; ‘Parallel Stripes’, ‘This Place Is a Shelter’ and ‘Window’ the other three)—it was an electrifying, energizing number. A Balanchine ballet, Allegro Brilliante, was next, set to the music of Tchaikovsky, and featuring 10 dancers, led by Emma-Rose Barrowclough and Jack Whiter; it was an NZSD première, done to a very high standard.
The Bach (no prizes for guessing the composer), choreographed by arts laureate Michael Parmenter, was commissioned by the School and first performed in 2002. Donna Jefferis’s costumes deserve praise in addition to the dancers, who raised the mood with their exciting delivery; some in the audience behind us without programmes even thought it was the last dance, with how uplifted they felt at the end.
The programme rewarded us, however, with one more ballet after the interval, performed again by the RNZB. William Forsythe’s In the Middle, Somewhat Elevated, originally reviewed by Lucire in 2016, featured some familiar names from the company: Abigail Boyle, Nadia Yanowsky, Casey Herd, Tonia Looker, Marie Varlet, Shaun James Kelly, Alayna Ng, Kirby Selchow, and Massimo Margaria, and showed off the athleticism and power of the cast. It felt to us like the Royal New Zealand Ballet’s present to the New Zealand School of Dance on its 50th anniversary. Thom Willems’ music (in collaboration with Les Stuck) is jarring; the ballet itself, however, challenges convention, and was an appropriate conclusion to the programme. We once called it ‘a ballet that inspires us to shake the establishment in our own lives,’ and it’s a fitting message to give to NZSD’s graduates. Push the envelope wherever you can, and advance your art. The training is certainly there.
Closing night for the graduation programme is Saturday, November 25. More information can be found at www.nzschoolofdance.ac.nz.—Jack Yan, Publisher